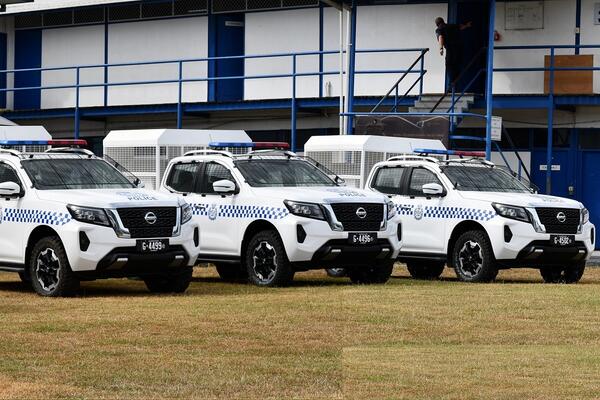 Acting RAPPP Commander Heath Davies said these were the first six vehicles that RAPPP had handed over to the RSIPF out of a total of 22 vehicles to be handed over in the coming months.

Heath Davies, Acting Commander of the Police Partnership Program (RAPPP) of the Royal Solomon Island Police Force (RSIPF) and the Australian Federal Police (AFP), has handed over six new vehicles to the RSIPF to support its frontline policing operations .

The handed over marked police vehicles will help alleviate the shortage of vehicles in the RSIPF. These much-needed vehicles will enable the RSIPF to respond to incidents and maintain its high-visibility community patrols.

The vehicles are part of the RAPPP mobility project which has focused on supporting the RSIPF with fleet management and replacement.

During the ceremony, Ms. Galokale said that the vehicles delivered to the police are timely as they will enhance the mobility capability of the RSIPF at a time when our security environment continues to evolve, necessitating continued investment in front-line police capabilities.

“These vehicles will elevate the mobility capacity of the RSIPF compared to what it was yesterday,” added the permanent secretary of the MPNSCS.

Acting RAPPP Commander Davies said it was a privilege for RAPPP to help RSIPF maintain and develop its capabilities.

He said these are the first six vehicles that RAPPP has handed over to RSIPF out of a total of 22 vehicles to be handed over in the coming months.

RSIPF Commissioner Mangau thanked RAPPP and AFP for their continued support and friendship.

“I call on officers to take good care of these vehicles. Use it for the intended purpose. We have our vehicle policy which will guide how officers use these vehicles,” Commissioner Mangau said.

The handover of these vehicles fulfilled one of the objectives of the RAPPP by helping the RSIPF to provide high quality policing services to the Solomon Islands and the wider community.

Since its inception in mid-2021, RAPPP has been supporting RSIPF in various areas of RSIPF including; technical advice, forensics, investigations, national operations, infrastructure, training, community engagement, health and spiritual support.

AFP and RSIPF have been partners for many years. AFP reaffirmed its commitment to support the RSIPF in the preparation of future events such as the 2023 Pacific Games.