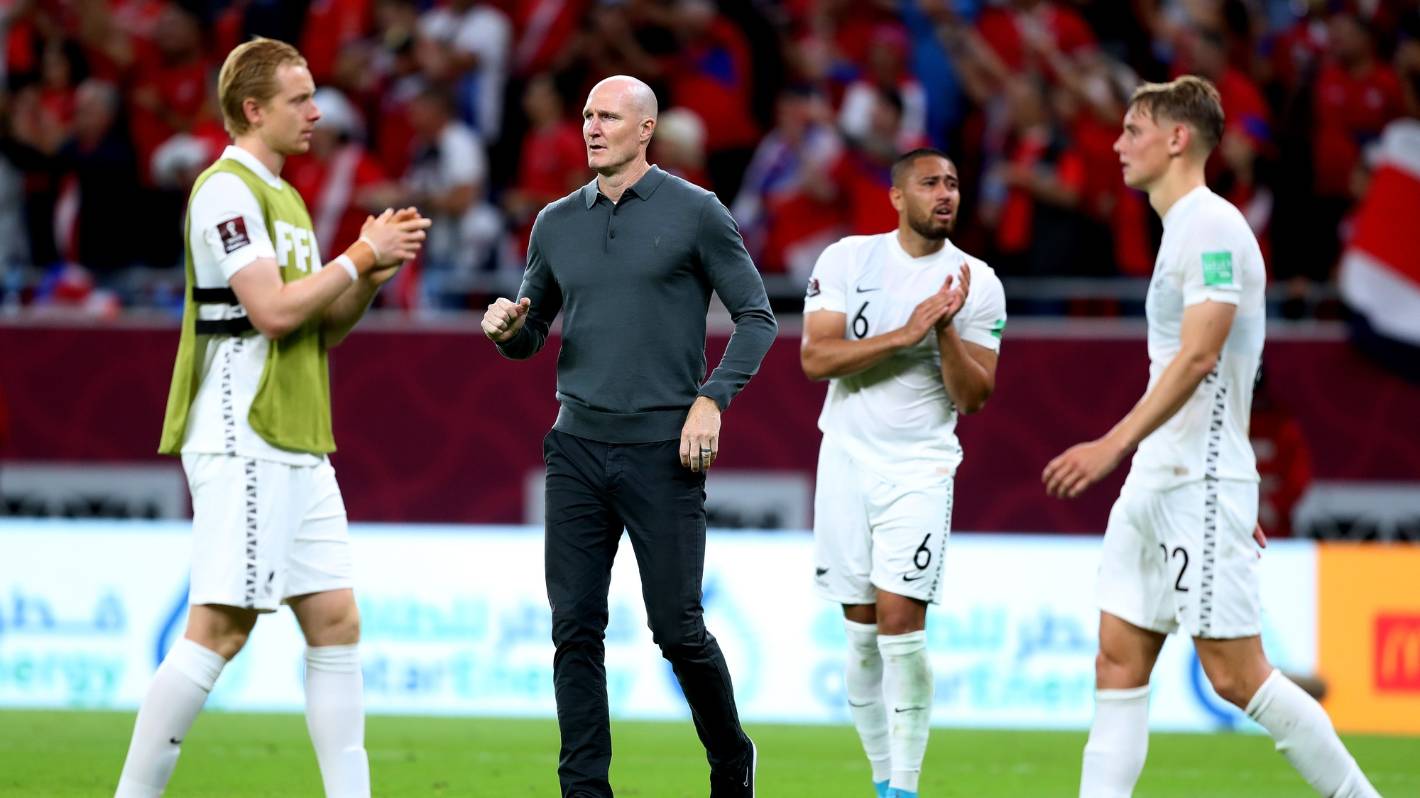 Whites coach Danny Hay’s contract is up for renewal later this year.

All Whites manager Danny Hay says he has yet to decide whether he wants to stay in charge of the team for the next World Cup cycle.

New Zealand missed out on a place at this year’s edition of football’s showpiece event when they were beaten 1-0 by Costa Rica in a one-off intercontinental qualifier in Doha earlier this week.

The All Whites fell behind after three minutes at the Ahmad bin Ali Stadium when Joel Campbell scored and couldn’t equalize despite dominating possession and the number of shots.

All Whites manager Danny Hay says the team’s first home game since 2017, against Australia in September, is an exciting prospect.

They thought they had a goal at the end of the first half through Chris Wood, but it was ruled out after a VAR intervention led to Matt Garbett being called off for a questionable foul in the build-up – the one of the few decisions that caused a lot of frustration after the game.

Hay’s contract as head coach will now be renewed after a pair of friendlies against Australia in September, staged to mark the 100th anniversary of the two countries first meeting, including one at home at Eden Park in Auckland.

When asked the day after the qualifiers if he wanted another four years, until the next World Cup, where the best team in Oceania will qualify directly, Hay replied “I really don’t know at this stage. “.

“I’m going to have to spend a lot of time thinking about it.

“Four years is a very long time, and I’m going to have to figure out if it’s something I can do again.”

Hay was appointed in August 2019 and took charge of the team for the first time in November, for a pair of friendly defeats against the Republic of Ireland and Lithuania.

The Covid-19 pandemic then kept the All Whites out of action until last October, although Hay, his team and a number of players were involved in the OlyWhites campaign at the Tokyo Olympics last June and July .

They have made up for lost time in the past nine months, gathering five times while navigating the now largely defunct managed isolation and quarantine system, which has made it difficult to return to New Zealand between windows until early this year.

“He has [been a busy period] and also the job is not easy,” Hay said. “You don’t have time to work with the players and a lot of the work you do is off the pitch.

“I’m incredibly proud of the coaching staff. They’ve done an amazing job, getting the players to play like they did last night, but it’s tough. I’m not going to lie, it’s not easy .

“I need to think long and hard about whether I can still put myself and my family in this situation.”

Hay said he was also proud of the players he had worked with during his coaching tenure and was confident they would be able to build on their promising performances of late, even though he was away – or if NZ Football chose to go in another direction. .

“I’m just incredibly proud that they embraced everything we put on the table.

“I think whether I’m here or not in the future, we’ve got something in place that’s going to have real longevity in terms of the environment and the culture and the players will own it now, and they’ll run it no matter who takes the team.

“We have laid a foundation that will hopefully have real longevity, both on and off the pitch.

“I think the way they play now, the style of football they bring, I think that represents who we are, ultimately, which has always been my goal.”

In Hay’s 14 matches in charge so far, the All Whites have won eight, drawn one and lost five. The three wins outside Oceania were against Curacao, Bahrain and Gambia at the end of last year.