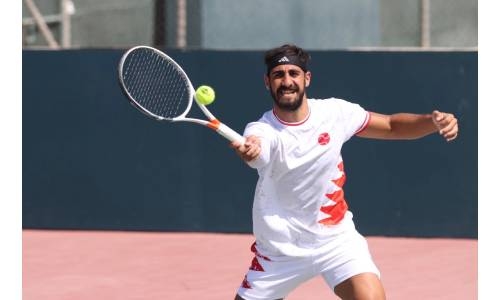 Here is the link to the full story

Bahrain ended its campaign in this year’s Davis Cup Group IV Asia / Oceania with back-to-back victories on the Bahrain Tennis Federation (BTF) hard courts in Isa Town. The Bahrainis beat Mongolia 3-0 in their final playoff clash yesterday, while on Friday they won their final Pool A match against Guam 3-0.

The nationals finish the tournament in the lower half of the standings of the 12 participating teams.

Yesterday, against Mongolia, Hasan Abdulnabi kicked off the first match with a resounding 6-0, 6-1 victory over Sukhbaatar Puntsag.

Yusuf Qaed went on to achieve a similar 6-0, 6-0 victory over Oyunbold Baatar, before Hasan and Qaed teamed up to beat Khatansuikh Batbayar and Puntsag 6-0, 6-1.

The Qaed-Hasan pair then finished the sweep with a relentless straight-set triumph over Mason Caldwell and Derek Okuhama 7-5, 4-6, 6-3.

Bahrain was coached by Hesham Malalla in the Davis Cup.

With the results, Saudi Arabia, the United Arab Emirates and Iran have all reserved their places in the Asia / Oceania Group III for next year’s Davis Cup.

Bahrainis will remain in Group IV.