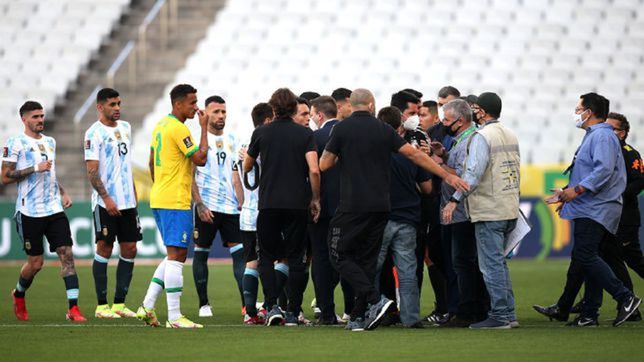 World Cup qualifier suspended between Brazil and Argentina has been postponed to be played in Australia on June 11, a decision which has yet to be ratified by FIFA but is likely to meet resistance from both sides given that the CONMEBOL qualification process is complete and Brazil and Argentina qualified for the World Cup as Pot 1 seeds.

The original game last September has been cancelled when Brazilian health officials entered the pitch to remove four Argentine players who had been in the UK in the 14 days before the game. According to Brazilian covid-19 protocols at the time, anyone entering the country from the UK had to quarantine for 14 days. Four Premier League players – Aston Villa’s Emiliano Buendía and Emiliano Martínez, and Spurs’ Giovani Lo Celso and Cristian Romero – allegedly failed to declare on their immigration forms that they had been in the UK in the two weeks before the game, despite playing in the Premier League.

The match was duly suspended with the score at 0-0 and there is little appetite from Argentina to stage it again, with the outcome largely irrelevant beyond another notch for either side in the historic rivalry between the country. Besides, Argentina consider the game over and contest points should be awarded to Lionel Scaloni’s side after the decision of the Brazilian health authorities to cancel the match. Even if that were to happen, it wouldn’t change the final standings in CONMEBOL qualifying, in which Brazil finished six points clear of Argentina.

the Canarinha were more open to the idea of ​​staging the game, partly as a warm-up for the World Cup and also as an opportunity to earn some money. Although Europe was initially considered for the match – Argentina will play a friendly match against Italy in London on June 1 – Brazil suggested Oceania and Melbourne Cricket Ground was selected.

The Argentine Football Association hopes FIFA will rule that the match, which remains an official fixture despite the bizarre circumstances surrounding a replay, shouldn’t take place after all. However, for the same reason that Brazil are quite happy to play, FIFA appear to have decided to capitalize on the opportunity with tickets set to go on sale at 2:00 p.m. local time in Melbourne on Thursday.

It won’t be the first time Brazil and Argentina have faced each other in Melbourne: on July 10, 1988 they played a goalless draw at the Olympic Park stadium and in 2017 they met again at the Melbourne cricket ground, with Argentina winning 1-0.