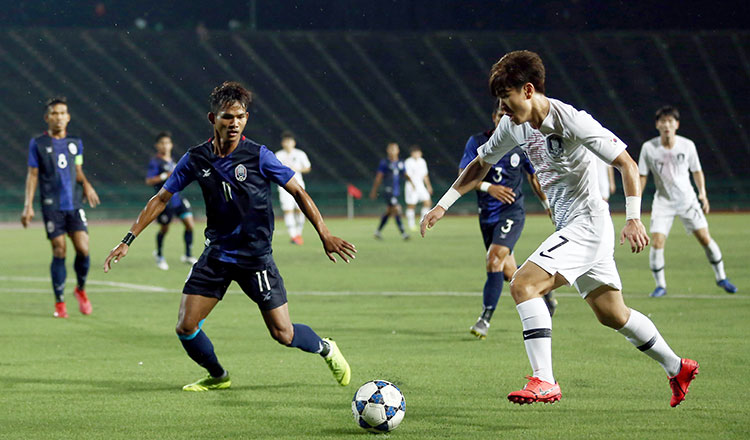 Cambodia’s ranking among the soccer-playing nations in the world has improved dramatically after its successful campaign in Bahrain.

The Koupreys beat Guam twice two weeks ago to reach the third round of the Asian Football Confederation (AFC) Asian Cup qualifiers.

The latest ranking published by the FÃ©dÃ©ration Internationale de Football Association (FIFA) places Cambodia in 170th place, a jump of eight points from its previous ranking. The ranking was published yesterday.

The updated FIFA rankings included 210 countries and territories from Asia, South America, North America, Europe, Africa and Oceania. The rankings, which are published monthly, are based on a national team’s performance in FIFA sanctioned international competitions.

Cambodia was ranked 178th in the world last month after a “catastrophic” performance in the 2022 World Cup qualifiers.

The Kingdom did not win a single match in the second round of the World Cup qualifiers. Cambodia has lost huge margins against Iran, Iraq and Bahrain. His best performance was a 1-1 draw against Hong Kong.

Cambodia is highly likely to continue climbing the standings over the next few months, with the Koupreys battling for a seat in the AFC Under-23 Asian Cup final.

Cambodia face Hong Kong and Japan this week in the AFC Asian Cup Under-23 qualifiers.

Cambodia, however, is unlikely to surpass the record ranking (153rd) it reached in March 2011 anytime soon. Its lowest ranking (198th) was recorded in August 2014, according to local media.

According to the FIFA rankings, Belgium has the best football team in the world, followed by Brazil, France, Italy, England, Argentina, Spain, Portugal, Mexico and Denmark.

The Belgian national football team, which includes Eden Hazard, Kevin De Bruyne and Romelu Lukaku, has been in first place since last year.