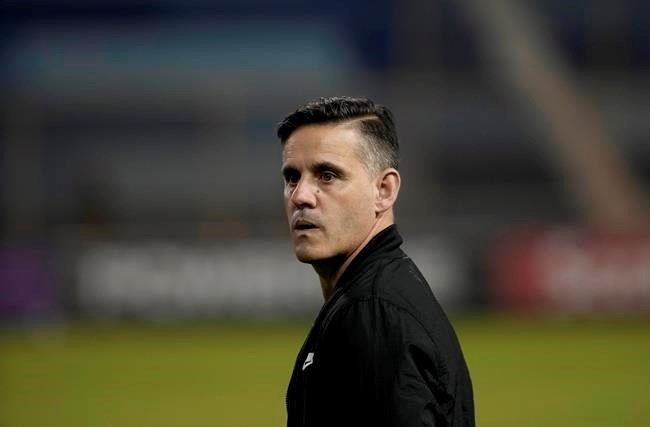 Four years into his tenure as coach of the men’s soccer team, John Herdman is now one victory away from leading Canada to the World Cup, ending a 36-year absence from the global showcase.

Four years into his tenure as coach of the men’s soccer team, John Herdman is now one victory away from leading Canada to the World Cup, ending a 36-year absence from the global showcase.

A Canadian tie in Costa Rica on March 23 would also do if Panama didn’t win that day. But first, a well-deserved closure after a three-game, seven-day trek across three countries that netted nine points for the 40th-ranked Canadian men in a grueling FIFA international window.

“I think we’re all exhausted,” Herdman said Wednesday night after a 2-0 win at El Salvador. “It’s been a great window, an empowering window.”

Once each team has played their remaining three matches, the top three will qualify for Qatar 2022, representing North and Central America and the Caribbean. The fourth place team will face a team from Oceania in an intercontinental playoff to see who will join them.

Following the visit to Costa Rica, the Canadians will complete their 14-game qualifying schedule for the final round on March 26 at home against Jamaica and March 29 in Panama.

A win in Costa Rica would give the Canadians 28 points and guarantee a top-three spot, with Panama and Costa Rica unable to catch them. A Canadian tie in Costa Rica, coupled with a Panamanian loss or a tie against a visit to Honduras, would also mean a top-three berth.

Still, Herdman has made it clear that the team doesn’t just want to qualify, they want to be CONCACAF leaders as they head to Qatar. He calls it “the new Canada”.

“For us internally we have very clear goals that we are laser-focused on. And we are on the right track,” he said. “We’re well on our way to really establishing ourselves as the new Canada and, as the players have said, warning the world.”

Traditionally, the mantra of qualifying was to win at home and hope for draws on the road.

Herdman’s initial goal was to collect all 21 points at home. The only blow so far was a 1-1 draw with Honduras last September at BMO Field in Toronto in the first game of the round. Canada has amassed 16 points out of a possible 18 so far at home (5-0-1).

And the Canadians have more than achieved that goal on the road (2-0-3).

Herdman moved from the Canadian women’s team to the men’s team in January 2018, a move that surprised people given the success he had with the women with back-to-back Olympic bronze medals in 2012 and 2016.

At the time, Canadian men were ranked 94th in the world, sandwiched between Gabon and the Faroe Islands.

Recall that the population of the Faroe Islands was estimated at 51,940 last July.

Herdman says he inherited a dysfunctional team divided into cliques – with two fights in training at his first camp in March 2018 in Murcia, Spain.

FIFA named Herdman’s side the most improved team in 2021 with a gain of 130.32 points that lifted the Canadians from 72nd to 40th in the standings.

Herdman had to rebuild the Canadian women’s program, picking up the pieces after the women finished 16th and last under Caroline Morace at the 2011 World Cup. He did this by asking players to remember why they played the game and for whom – and with the possibility of inspiring a nation with their performance.

With the Canadian men, he inherited a team that had gone through coaches Colin Miller (twice), Tony Fonseca, Benito Floro, Michael Findlay and Octavio Zambrano — in interim or permanent roles — since Stephen Hart stepped down. following a humiliating 8-1 loss to Honduras in October 2012 that prevented Canada from advancing to the final round of qualifying in the region.

A coach known for his detailed planning and motivational skills, Herdman offered his players a unique opportunity during his first interviews with them.

Leave a legacy. Become heroes. See you at the World Cup. Become a band of brothers.

“I’ve always said it. These guys are fighting for something way beyond three points per game and qualifying for Qatar,” he said. “And we have been since I took over the team. There’s been real clarity. It’s taken time for the players to really burn it in their minds and, I think, connect around that goal. common. And it’s there now. It’s so clear.

“Like I say sometimes as a coach, you know it’s going to happen. You just know.”

Herdman made believers out of his players.

“For us, it’s about making this national team a force to be reckoned with,” said full-back/winger Richie Laryea, who recently left Toronto FC for Nottingham Forest in England.

“It’s an ‘us versus me’ mentality here that’s been amazing to see,” he added. “Everyone is here for a bigger and bigger goal… It’s a tough environment but it makes it very open and great brotherhood for all of us.”

Players have benefited from Canada’s success in other ways.

Laryea’s ability to obtain a work permit to play in England has been aided by Canada’s rise in the rankings. Human star striker Jonathan David is set to complete a megabuck transfer to one of the world’s elite clubs from Lille in France this summer.

Herdman remains a powerful motivator, helping players keep an eye on the prize.

“Some of the speeches he gave before games, at our meetings and things like that, you sit there and you’re like, ‘I’m ready to play now,'” Laryea said, throwing out an expletive to emphasize. . “That’s the type of speaker he is – motivational, inspirational.

“Because every time he has these discussions with us, you literally look around the room and everyone is locked in…He’s been great. He’s been great for this program. We are and I think everyone country is very privileged to have a guy who came and changed the culture like that for our national team.”

It’s a measure of Canada’s success that the 2026 World Cup, which Canada co-hosts with Mexico and the United States, is barely mentioned these days. In the past, many would have seen hosting the tournament as the only way for Canada to get there.

Herdman had to prove more than one person wrong, recalling he “took a lot of stick” when he was named manager of the men’s team.

Giving Haiti a 2-0 lead in a 3-2 quarter-final loss in the 2019 Gold Cup did not help their cause. Herdman did not forget the negative reviews.

“I remember someone described our result in Haiti as the best in Canadian football history,” he said after Wednesday’s game. “Personally, for me, I just had to learn and it’s been a great learning experience, just to sort it all out.”

And when Canada Soccer discovered the men had to start at the bottom in qualifying for Qatar while Mexico, USA, Jamaica, Honduras and Costa Rica were byes in the final round, Herdman saw the glass. half full despite the long way to go.

What history could Canada write along the way, he proposed. His team delivered.

This report from The Canadian Press was first published on February 3, 2022

OMG you will never believe what the laser vacuum revealed