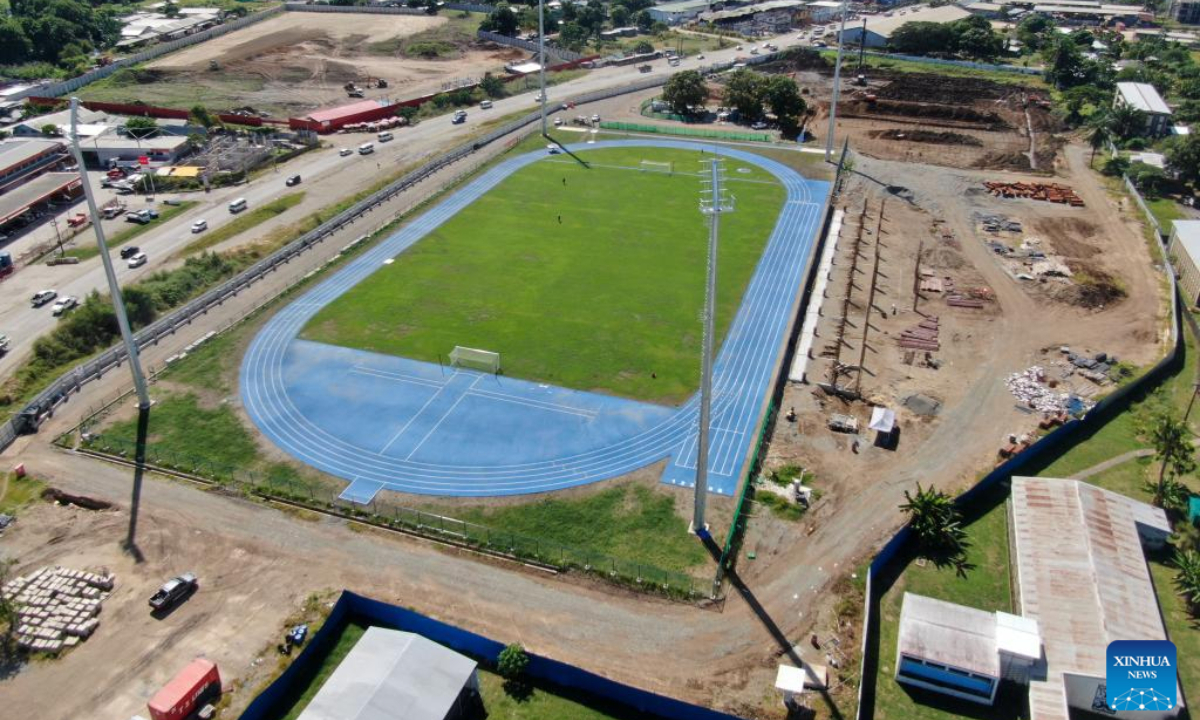 Aerial photo taken on May 4, 2022 shows the athletics track and soccer field as part of a stadium project for the 2023 Pacific Games in Honiara, capital of the Solomon Islands. Photo: Xinhua

The athletics track and football pitch as part of a stadium project for the 2023 Pacific Games, built with the help of China, have been completed and officially handed over to the Solomon Islands.

The quality rubber running track is the first of its kind in the Pacific island nation.

At the handover ceremony held on April 22, Solomon Islands Prime Minister Manasseh Sogavare expressed his gratitude for the support provided by the Chinese government and people, and praised those who overcame the difficulties and carried out the project with a high level of quality. He called it a milestone for the Solomons in preparation for the Pacific Games.

The stadium project, which will be the main stadium for the 2023 Pacific Games, comprises seven venues, including the main stadium, aquatic center, tennis center, communal food and beverage center, multi-purpose hall, field hockey and training ground. , and ancillary facilities. These stadiums and facilities will be built over the coming year to help the Solomon people and government realize their dream of hosting the Pacific Games.

Huang Pengfei, an expert technician from China Civil Engineering Construction Ltd., said, “This is the first large-scale construction project since the two countries established diplomatic relations. Construction has become even more difficult due to the limited timeframe and disruption to logistics due to the COVID-19 pandemic.”

Overcoming the adverse conditions posed by the pandemic, Huang was eventually able to launch a construction team of nearly 700 people from China and the Solomon Islands, thanks to the support and coordination of the two governments.

The first difficulty the team encountered before settling on the construction site was the disposal of explosive ordnance on and around the project sites left over from World War II.

The Guadalcanal campaign during World War II had left the islands with many unexploded bombs. A mechanical construction operation could set off an explosion if the bombs left over from the war were not disposed of properly.

An ammunition explosion caused by fire occurred in the area shortly before the start of the on-site project and casualties were reported.

“We hired a professional EOD team to undertake three rounds of EOD missions. The EOD team discovered many bullets and bombs at the construction site. It took two months before the projects could proceed,” he said. -he declares.

The project now has a staff of 170 Chinese technicians and around 500 local employees who worked together as one team.

Chinese technicians are also providing training to local workers during construction to improve their skills and expertise. The training was well received by the local population and the government.

The stadium project has laid a solid foundation for the Solomon Islands to host the 2023 Pacific Games and facilitate the country’s economic and infrastructure development. It is the result of the positive development of bilateral relations and is an example of bilateral cooperation as well as a symbol of China-Solomon Islands friendship, the ambassador said.

Aerial photo taken on May 4, 2022 shows the athletics track and soccer field as part of a stadium project for the 2023 Pacific Games in Honiara, capital of the Solomon Islands. Photo: Xinhua

A groundbreaking ceremony for the 2023 Pacific Games stadium project is held in Honiara, capital of the Solomon Islands, on May 5, 2021. Photo: Xinhua

African Cup: the Nigerian team starts on a good note