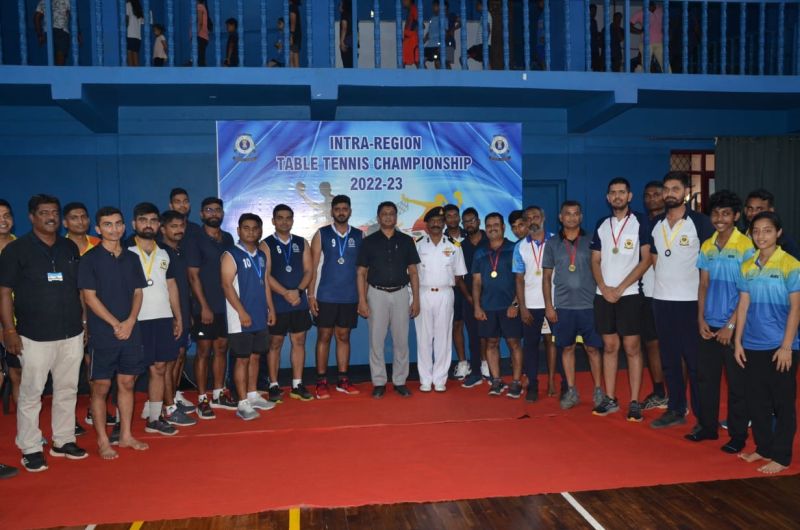 Mangaluru: The Coast Guard sports calendar has taken off in a prodigious fashion with the Karnataka Coast Guard hosting an intra-regional Table Tennis Championship in Mangalore from 23-24 March 2022 at the Mangala Indoor Stadium. The event was attended by enthusiastic players from the Coast Guard Pan West Region.

A total of 24 players divided into six teams participated in the intra-regional table tennis championship. All players exulted in high team spirit and participated with joy. The primary objective of the championship is to improve the overall physical standards of CG personnel and to develop physical talents to their maximum potential. It also helps to engage in competitive activities while promoting good health, safety, and physical fitness to exemplify good conduct as a means of learning good service conduct and camaraderie.

The event was graced by Shri Devajyoti Ray, IPS, Inspector General of Police (Western Range), Karnataka as the chief guest of the event. The guest of honor congratulated all the winners and participants and also praised the efforts of the ICG to promote the importance of sport in our daily culture and the median to stay in shape. Any sporting event such as table tennis attracts multiple dimensions in the physical body and basic fitness such as reflexes and also helps to maintain mental fitness.

The main guest also sent a note to the participants who, even though they didn’t win any of the prizes, still put on a great show in the competition, in keeping with the old adage: “It’s the participation that counts “. Also, he insisted on the addition saying it’s never too late to start over and try again. ICG has actively organized such sporting events to encourage physical fitness and provide a platform for talented people in the field of sport service to shine and showcase their sporting talent, listing under Honorable Prime Minister Vision, ‘Khelo India’.

New Zealand – New Caledonia: the Whites ready for the semi-final of the World Cup qualifiers

Eiffel Vivasa’s luxury apartment is equipped with all amenities