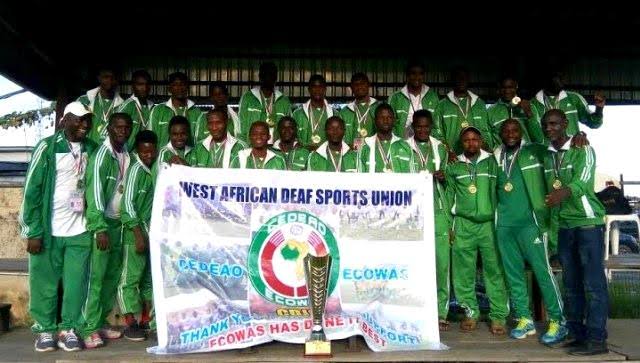 A team of 13 athletes and officials from the Nigeria Deaf Sports Federation left Abuja on Friday for the 24th Summer Deaflympics which runs from Sunday to May 15 in Brazil.

Lukeman Agbabiaka, secretary general of the federation, said in an interview that the team includes eight athletes and five officials.

“The team departed via an Ethiopian Airlines flight from Nnamdi Azikiwe International Airport in Abuja to Caxias do Sul in Brazil,” he said.

Mr. Agbabiaka said the athletes who are enthusiastic and ready to make the nation proud will compete in athletics and table tennis events during the 15-day Games.

He said the federal government had approved the trip and the federation was grateful to the Ministry of Youth and Sports Development for its support.

The federation’s general secretary said he was confident his technical team had done the necessary during the team’s preparations at camp for the competition.

“Given this, the athletes went into the competition in high spirits and will be able to sweep the medals in both events,” he said.

Mr Agbabiaka said Nigeria had a good history in the competition, having made their debut at the 21st Summer Deaf Olympics in Taipei Taiwan in 2009, where the athletes won two silver medals.

“Also, in the 22nd edition in Sofia, Bulgaria, we won a bronze medal,” he added.

The Deaflympics are World Games for the Deaf, similar to the Olympics and Paralympics for able-bodied athletes and para-athletes respectively.