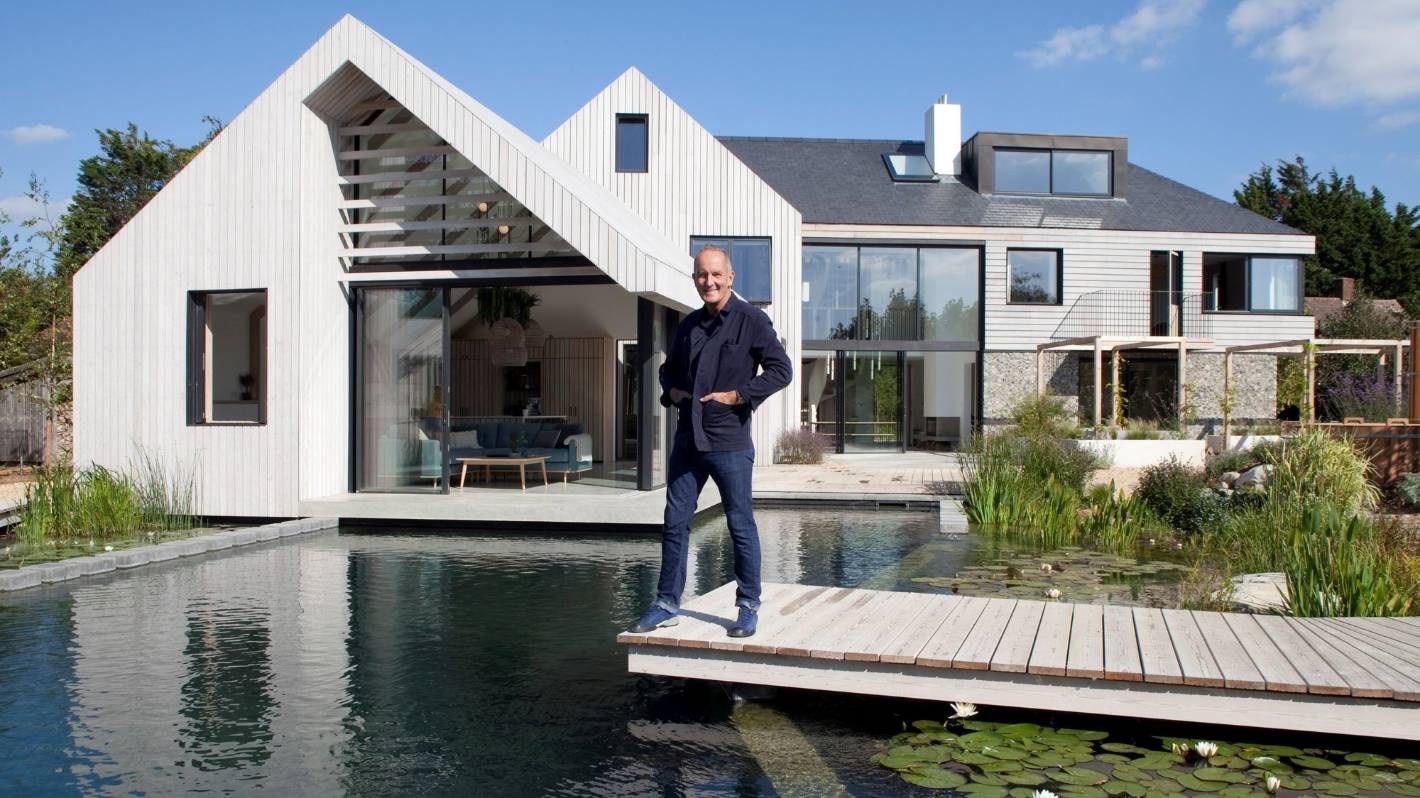 Review: It’s always gonna be a great show when you start watching grand designs and hearing yet another owner describe themselves as “obsessive”.

And of course the “obsessive” Dan and Nina have an extremely ambitious plan – if they can pull it off and not be overrun by frogs and mosquitoes, it will be a super cool house.

The couple have bought land near Chichester on the South Coast which comes with a 1930s house they plan to bowl in and a huge dirty pond. (Presenter Kevin McCloud calls it a “cruddy site.”) You can almost smell the pond grass. But it was the pond that sold them the property – they want to tame it and build a house on it.

Well, part of the house will seem to float like an island – this volume, containing the kitchen-dining room, will be connected to a huge three-story volume by a glass-walled bridge.

It will be a huge home for the couple and their young daughters Isla and Lexi. (You might wonder why it has to be so huge, but why spoil the fun?)

Do all these people have unlimited budgets? Because you really need a contingency plan when your vision is as drastic as this. They have already paid £800,000 (NZ$1.54m) for the property and have budgeted £650,000 (NZ$1.25m) to build via savings, loan and income.

The plan includes dividing the pond into two. There will be a small natural pond to meet drainage requirements and a larger concrete lined pond or pool with filtration.

Pool with frogs, newts and lots of water lilies

This pool will contain “hundreds” of aquatic plants, but Dan says it’s designed “so you can literally open the kitchen window and jump into the pond or natural pool.” You can dive with the newts”.

McCloud says that all of the project’s success hinges on “a complex aquatic ecosystem that can go horribly wrong.”

“If we’re successful, we should have crystal clear water,” Dan says. “In the worst case, you have blue algae, which is toxic.”

Dan is an architectural designer and Nina is an interior designer, so they know their stuff. But Dan also wants to build a large part of the house himself, which will save him money.

And he looks in his element cleaning the pond, digging and dumping dirt, with dad giving advice on the phone. One of the reasons for the rush to complete the project is the poor health of Dan’s father, who was diagnosed with leukemia.

Unfortunately, three months after the start of construction, his father died.

The couple are then touched by the news that a loan on a London flat they own has not been granted, leaving them more than half a million pounds short of funds. They have to sell the property – but it doesn’t sell and construction is halted.

We’ve seen this happen before, and it’s still a painful watch. Eight months pass without any on-site work. Then in the summer, the apartment finally sells, and it’s back to work. But first, Dan has a tennis court installed. Nice, but expensive, and a strange start to construction, surely.

Construction progresses, but the stress of trying to be everything to everyone kicks in as Dan tries to juggle family life, work, and the project. (it would not be grand designs without this.)

After 15 months, the SIPs (structural insulated panels) arrive and only have to be put in place. And now the building is taking shape.

McCloud is back for a visit, overlooking the club-sized tennis court and lawn that looks like a putting green. He thinks it looks like a sports club – and the camera catches Nina looking distinctly grumpy. You have to wonder about priorities, when the “pool” is currently only a bunker for muddy water, and the house is barely half finished. It’s disconcerting, quite frankly.

McCloud convinces Dan, Nina and the pup to stand in the dirty pool for an interview. Classic.

Nina does the hard work with their fourth winter in the old house, with the boiler broken, so they often have no hot water or heating. And Dan is working hard to make the new house waterproof; he finds it difficult to cope.

Against all advice, he even begins the interior decoration without windows in place, which is silly. They paid £70,000 upfront for windows that didn’t appear on the correct day because they weren’t even made. It’s the last straw.

No, not quite the last straw – Covid-19 hits, and they can only have one person there. Nina’s sick parents come to live with them for the duration.

Eventually, work resumed. But money is so tight – they could do with the money that went to the tennis court and £10,000 from big trees.

Three years after work began, McCloud is back for the reveal. First he encounters the small pond (“the mud pit”), then he turns around the corner, and wow, it’s “the aquatic Eden”. (McCloud says aquatic so it sort of rhymes with “quack” in the middle, while some of us think aquatic should rhyme with “what” in the middle – it’s English vs. American just in case you would wonder.)

There are reeds, water lilies, flowers, bees, a pier and crystal clear water. No blue agae in sight. And of course, the house seems to cantilever over the pool.

It’s completely magical, as McCloud suggests – he describes it as “a slice of heaven on earth”. And the house, clad in silver Siberian larch and local flint, is truly impressive.

Dan and Nina are happy, but exhausted. They just moved in and the old house is gone. They sit in the pool every day, with dragonflies, newts, frogs and swallows coming down to clean their wings. They recreate a wild nature in the landscape. Sir David Attenborough would be impressed. But we wonder how the pool will behave in winter after weeks of rain.

One of the best builds we’ve seen

Although we can’t really tell, the construction of the house is probably the best we’ve seen. grand designs – it is sharp and finely detailed. The interior is bathed in light. Unlike so many houses in the UK, this one opens directly to the outside, which in this case is the water. The family can run through the house and dive right into the pool. (Eyes on children at all times.)

The glass-walled deck leading to the kitchen is a perfect transition from the huge three-story atrium. McCloud says it’s a homage to the 60s – he even mentions Tracey Island.

Not sure about the mid-century reference, but it’s spectacular with its wood-lined sculptural staircase and large skylight. Minor point, but the small table and seats seem insignificant and don’t fit the scale of the space. Also, I can’t see them carrying plates of food across the “bridge” to sit down and eat. Maybe it’s for a wine tasting?

It’s an enviable lifestyle, and the most remarkable thing of all – they only went over budget by £8,000, which must be something of a record.

“We really had to put our money to work,” admits Dan. “But, what we put in there – it’s definitely going to make us more.”

And then, right at the end, McCloud dives to swim. Now this is a first. He’s stupid, and so are we; he doesn’t want to leave. It’s one of the best grand designs ever built, not least because it proves that England really does have a wonderful summer.

Around the Pound – UIndy Athletics