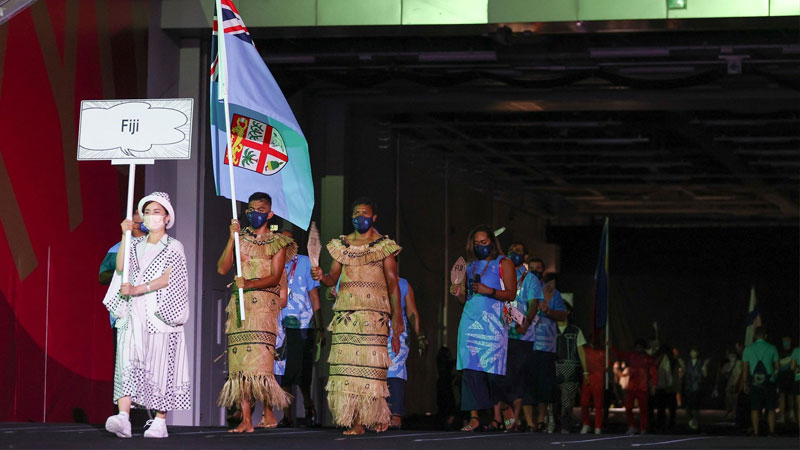 Vakasama has replaced two-time Olympian Jerry Tuwai, who was initially announced as one of the standard bearers.

The two were dressed in traditional iTaukei “Kuta” attire as they led a small contingent of Team Fiji who all wore bright blue Fiji walking attire.

Members of the 7s teams did not participate in the opening ceremony, but they still got into the spirit of things and put on their walking gear and interacted with other athletes.

The ceremony itself was modest, a reminder of everything the world has been through but offered hope for what is to come.

But the lack of crowds was glaring as masked and socially distant athletes waved to empty stands and there was no roar accompanying their march into the stadium.

Some 900 dignitaries watched in the 68,000-seat room, including the First Lady of the United States, Dr Jill Biden and French President Emmanuel Macron.

The ceremony also paid tribute to the universality of sport, its power to unite people of different cultures and origins and to instill a sense of hope, even in the most troubling moments.

The honor of lighting the Olympic flame went to Japanese professional tennis player Naomi Osaka, signifying the beacon of hope that the Olympics strive to be.

Sally Yee will kick off the Team Fiji campaign at the Tokyo Olympics table tennis competition at noon today.

The men’s competition for the 7-a-side Olympic Games will take place from next Monday to Wednesday.

The Fiji men’s 7-team will begin their Olympic gold medal defense against Japan at 12 p.m. Monday and then face Canada at 8 p.m. Monday.