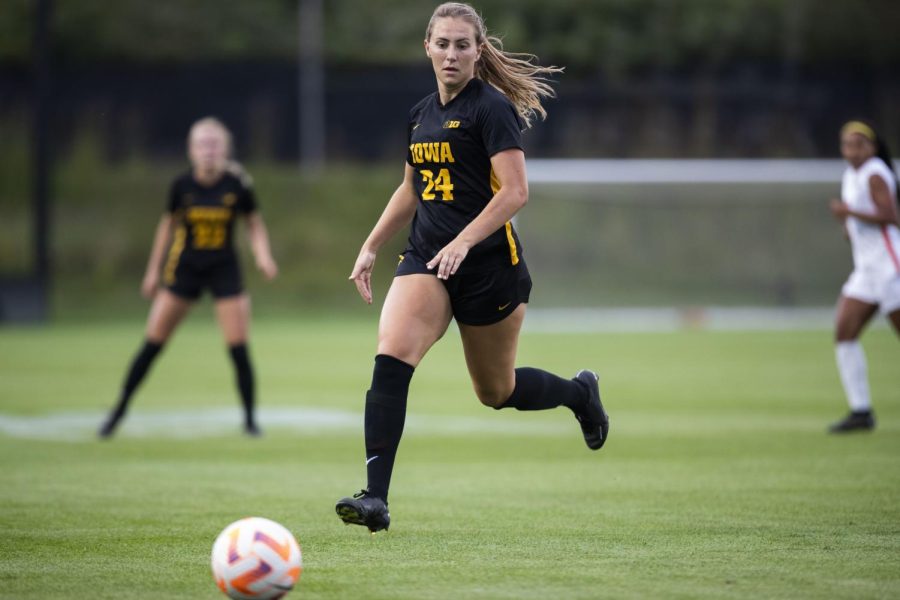 The Hawkeyes dominated the possession battle in the first half, getting 15 of the Tigers’ four shots. The first goal, however, didn’t come until the 65th minute when Iowa’s Sara Wheaton kicked in a free kick from around 55 yards, which Kyndal Anderson headed into the back of the net.

“I feel like me and Sara [Wheaton] I connected really well on the long balls…so I just put my hand up and I was like, ‘Sara, give me the ball,’” Anderson said with a laugh. “And luckily he got in.”

Wheaton said she spent a lot of time practicing working on her serves in the box.

“We talked about it this week, how we have to trust our runners that they’ll be in the right place at the right time,” the fifth-year said. “And I just did what I could and put a ball and Kyndal [Anderson] had the chance to end it.”

Just over 10 minutes later, however, Pacific’s Reid Morrison headed down into the back of the net from a Hana Rosenblatt corner kick, leveling the game at one apiece.

Iowa could only get two shots in the second half to Pacific’s four.

Head coach Dave DiIanni said the result was unfortunate as the Hawkeyes played some of their best football of the year, moving the ball effectively, creating scoring opportunities and trapping the ball defensively.

“Pacific did a little bit in the second half, but we still created enough chances to get the second goal,” DiIanni said. “And unfortunately their goal was the result of a few different mistakes on our part.”

DiIanni said the Hawkeyes could have done a better job finishing and being more patient in the final third.

2021 West Coast Conference Goalie of the Year Brenna Crump made 11 saves on the night, including 10 in the first half.

Sitting at 2-2-1, DiIanni said his team’s record reflects inconsistencies, although he said the Hawkeyes have improved with every game.

“We’re looking for a bit of identity and we’ll get there,” DiIanni said. “We will get there sooner than later.”

DiIanni said the return of players like Kenzie Roling and Addie Bundy, who earned their first picks of the season on Sunday against DePaul, as well as Maggie Johnston, who played her first minutes this season against Pacific, will help the Hawkeyes as the returning athletes carry on. to recover and play more minutes.

The Hawkeyes will play a three-game road series at Baylor, Iowa State and Northern Iowa on September 4, 8 and 11, respectively.

Wheaton said there are a lot of positives to take from the game against Pacific that Iowa can take away in their upcoming games.

“We were kicking the ball in and out of the forwards and midfield and changing the point of attack,” Wheaton said. “So I think attack-wise we were doing very well. [On] defense, I think we were aggressive and winning tackles and we definitely left everything on the pitch. So going into rivalry week will be good.

“They know how to take money”