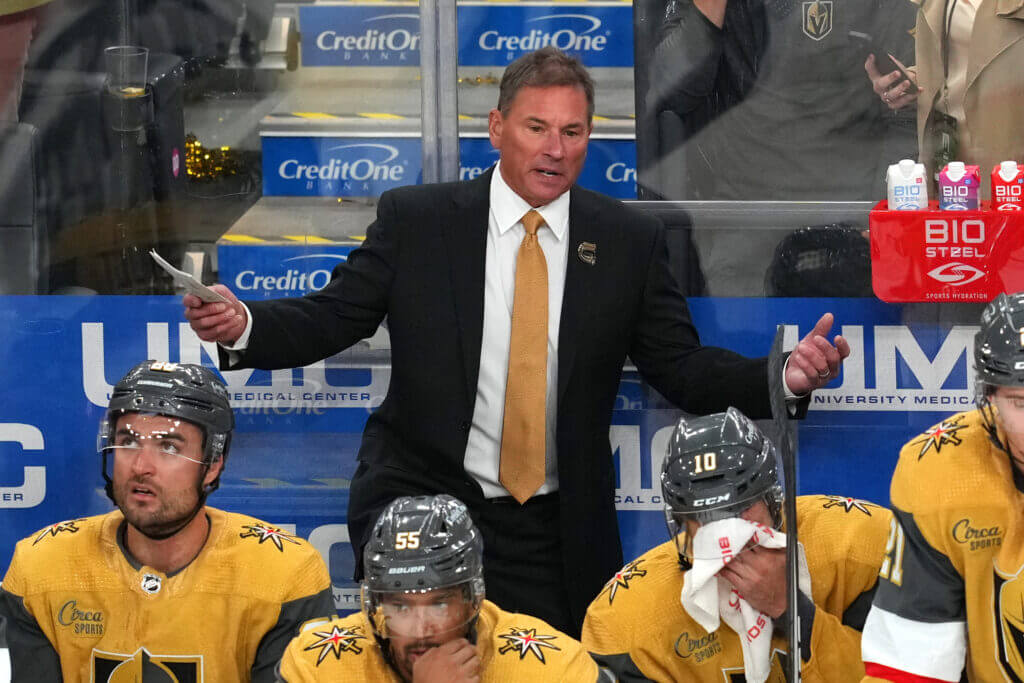 The Golden Knights answered a lot of questions in the first 15 games of the season. At 13-2, they achieved a league-best record behind a dogged defense, already building a significant cushion between themselves and other Pacific Division contenders.

One question that remains is how Vegas will fare against elite NHL teams. At this point, the Golden Knights have played the 12th easiest schedule, facing only one team with a top-five record. It was the Winnipeg Jets 8-3-1, and Vegas handed them two of those losses.

The Golden Knights’ only two losses are to Colorado and Calgary, both of whom were among the preseason favorites to win the Stanley Cup. That’s not to downplay the impressive start, but we’ve yet to see how Vegas’ defense — which has been elite so far — will fare against the best in the league.

Vegas has allowed the fewest goals per game in the NHL (2.27) and is near the top of most defensive metrics. Even in the 3-2 loss on Oct. 22, the Golden Knights kept Colorado’s mighty fifth-ranked offense well below its season average in almost every stat. The Avalanche won on two power-play goals, but Vegas kept their even-strength offense largely in check throughout the game.

The layered zone defense that Coach Bruce Cassidy uses takes center ice incredibly well. Penetrating the area for high-risk scoring chances may require elite offensive skills. With such a small sample of Vegas’ defense under Cassidy available, it might be worth seeing how his Boston teams fared against the league’s best. He coached at Boston for five seasons, but due to the wacky schedule in 2020-21 when teams only played in their division, we’ll look at the other four years.

Excluding this season, Cassidy Bruins teams have faced a team with a top-five record 53 times in that span, going 21-25-7 (.462 percentage points). That might not sound too impressive, but it’s a respectable record against the NHL’s best.

The overall takeaway is that Cassidy’s teams performed well against the best in the league. They certainly haven’t dominated, with 11 more losses than wins, but the Bruins have held up as well or better than most elite teams. At the very least, it rules out the idea that Cassidy’s zone defense preys on the weak and fails the good teams.

To dig deeper, we looked at how Cassidy’s Boston teams performed against the league’s best offenses in particular. In 56 games against teams with the top five offenses between 2017 and 2022, the Bruins have gone 26-23-7 for a .527 point percentage. Again, it’s more than solid against highly skilled teams.

The top five 2021-22 offenses against Cassidy

The top five offenses of 2019-20 against Cassidy

Cassidy Bruins teams have consistently ranked near the top of the league in defense and have done so against all forms of competition. Now he’s coming to Vegas and the Golden Knights are playing elite defense. It is not a coincidence.

This year, Buffalo is the highest-ranked offense Vegas has faced. The Sabers are second in the NHL with 3.86 goals per game and managed to generate more offense than most against the Golden Knights on Thursday. The final score of 7-4 indicates a shootout, but Buffalo scored three of its four special teams goals (two on the power play and one on the shorthanded).

At even strength, Vegas limited Buffalo to 24 shots and one goal, but the Sabers generated 32 scoring chances — the most the Golden Knights allowed all season. They used their speed to turn turnovers into quick offense the other way, and were able to make multiple passes into the slot for shots on goal – something Vegas has allowed very little of this year.

The Golden Knights also played Seattle on October 15, and the Kraken surprisingly have the eighth offense with 3.57 goals per game. Vegas stifled Seattle in that fight, winning 5-2, and won’t play another current top-five offense until Nov. 19 in Edmonton.

Special teams are always a problem, but so far the Golden Knights have played some of the most structured and disciplined hockey in the league at even strength. It doesn’t matter if they face a top team with scorers in the lineup or not. Will this continue? The defensive talent of this formation, both defenders and forwards, combined with Cassidy’s history suggests as much.