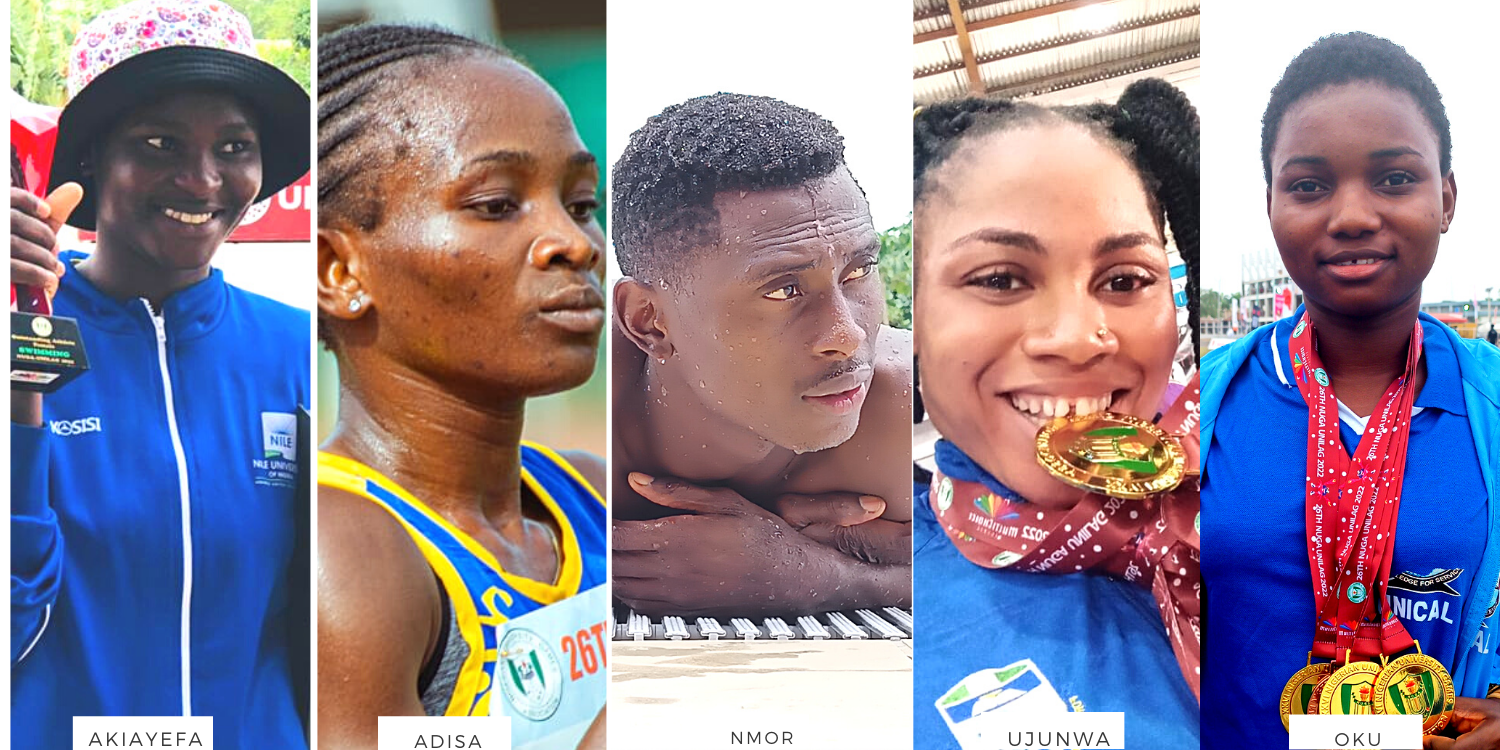 The University of Lagos was an exciting hive of activity for 10 days as students from across Nigeria dropped off their notebooks and pens for their football boots and running shoes to take part in the 26th edition of the Nigeria University Games, NUGA.

Among the more than 10,000 athletes from 70 universities who marched, some distinguished themselves with stunning performances in the respective sporting events in which they participated.

Getting on the podium and winning a medal takes hard work, not to mention winning multiple medals, with many athletes earning the consolation medal from mere participation. Thus, congratulating and praising athletes who have won multiple medals should be the norm.

PREMIUM TIMES shines the spotlight on the athletes who won four or more gold medals at the NUGA Games 2022 and hopes they will realize their undoubted talents in the future.

During a conversation with PREMIUM TIMES in Lagos, these exceptional athletes shared some of their secrets of success as well as their dreams and aspirations as student-athletes.

Nmor is an example of consistency, excellence and hard work. The final year accounting student from the University of Port Harcourt won 15 medals – 13 gold and two silver, at the just-concluded Nigerian Universities Games, NUGA, held at the University of Lagos.

Unquestionably, Nmor was the most valuable athlete of the NUGA Games 2022. The multi-medal winner from Uniport told PREMIUM TIMES that the results were the result of hard work, excellent facilities and constant preparation from himself and the school.

Nmor was also the captain of the winning team of the Uniport event. He revealed that winning medals was the main goal when coming to NUGA.

He reiterated that the University of Port Harcourt is a place that nurtures and discovers talent. Uniport has won the last seven consecutive NUGA Games. Predictably, he won the Most Outstanding Male Athlete award.

Just like Nmor, Timipame-Ere won the Most Outstanding Female Athlete award with an astonishing record of 11 medals in swimming.

Speaking with PREMIUM TIMES, she said what drove her heroic performance was her focus on medals.

Adisa Rhoda Ifeoluwa born in Jos to Yoruba parents from Oyo is a 400 level student in Agricultural Economics at the University of PortHarcourt.

Rhoda competed in both judo and track and field where she won a total of six medals for her school. She won three gold medals in the 3,000, 5,000 and 10,000 meters and a silver laurel in the 1,500 meters. Apart from athletics, she also won gold and silver in the 48 kg category of the women’s judo event.

While this won’t be the first time Rhoda has competed in a major judo competition, athletics was a new love the lady discovered at these Games. She told PREMIUM TIMES that entering the competition, she was confident of good results.

Rhoda also added that she had back-to-back competitions in judo and athletics until her last event last Thursday. Her first challenge was the 5,000 meters where she won gold before taking silver in the 48kg category in judo the following day.

Now for Rhoda, who revealed her focus has shifted to her new love, which is athletics. She said what motivated her and got her interested in the 5,000 and 10,000 meter races was the “stamina” she knows how to possess.

She says; “Before participating in the WAUG 2018 for the judo event at my school, we do a fitness test. We did a Copa test, which lasted about 12 minutes, almost eight rounds and I found out that I had good stamina.

Rhoda also added that although she practiced judo for four years, she always wanted athletics which she eventually competed for the first time in NUGA and won gold medals. She, however, now hopes to continue in Athletics.

Ujunwa couldn’t hide her excitement after picking up six medals in taekwondo and karate for the University of Port Harcourt.

Ujunwa told PREMIUM TIMES she was motivated because she didn’t want her friends, family and the school that put her in charge to be disappointed. Ujunwa said she trains intensely for two hours every day to stay focused.

She also added that her karate role model is a man named Sensei Bob Bamboye.

A professional karate and taekwondo fighter who won medals at the last sports festival said her focus is on the World Shotokan Karate-do Federation (WSKF) world championship in Japan, the Commonwealth Games and the Games of the International University Sports Federation (FISU).

University of Calabar table tennis player Oku won four medals in total and was named table tennis’ most valuable athlete during the competition.

She won gold medals in women’s singles, doubles and team events, as well as a bronze medal in mixed doubles.

Speaking with PREMIUM TIMES, Vivian said she sees herself as a professional table tennis player one day.

The youngster also added that her role model is Calabar born table tennis star Offiong Edem due to his playing style.

She revealed that she trains according to her free time from Classes and tests.

“It depends on my schedule and school activities, such as lessons, tests and exams. If possible – every day for about two to four hours.

Support the integrity and credibility journalism of PREMIUM TIMES

Good journalism costs a lot of money. Yet only good journalism can guarantee the possibility of a good society, an accountable democracy and a transparent government.

For free and continued access to the best investigative journalism in the country, we ask that you consider providing modest support to this noble endeavour.

By contributing to PREMIUM TIMES, you help sustain relevant journalism and keep it free and accessible to everyone.