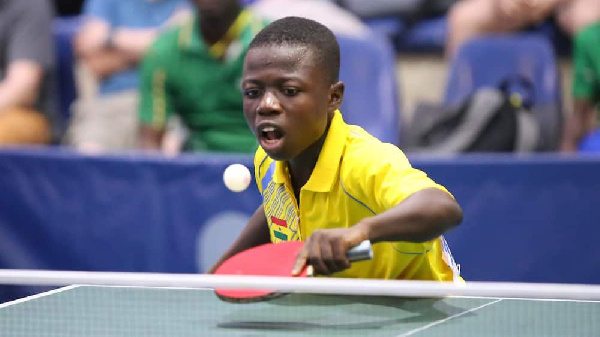 Crowned champion of the mini cadet category of the ITTF world junior and cadet championships organized in Ghana in 2019, and also winner of the U19 category of the 2021 players’ tournament, Gado spares no effort as he represents Ghana in the international competitions.

Gado was among the newly added faces including Godwin Alabi, Emmanuella Yaa Kyere and Blessing Labanti, who joined experienced players from the national team to represent Ghana at the ITTF West Africa Championship in Nigeria in October this year.

Although this tournament was his first competition abroad and he met some very talented players, he didn’t let the pressure of the atmosphere put him off.

Young Gado put in a spectacular performance at the start of the men’s singles category but was short-lived in the round of 16 when he lost to eventual winner Rilwan Akanbi.

He then teamed up with fellow rising star Godwin Alabi to reach the men’s doubles quarter-finals.

Gado has returned to training and is eager to improve his playing techniques and plans in order to have more opportunities to represent the country.

He admires current Ghanaian champion Emmanuel Commey and sensational table tennis legend Timo Boll and wants to be like them in the future.

Alternatives to payday loans in states where they are prohibited