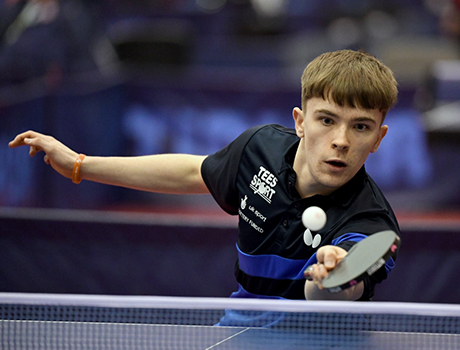 After three singles golds, the British players dominated a very strong MS18 doubles class on the final day of the Para Costa Brava Spanish Open at Platja d’Aro with Ross Wilson and Joshua Stacey beating Aaron McKibbin and Billy Shilton in the final to take the gold.

The men’s, women’s and mixed doubles events have now replaced the team events in all international Para table tennis competitions, including the Paralympic Games. The category of pairs in doubles events is determined with a maximum number obtained by combining the class numbers of the two players.

Singles gold medalists in men’s classes 8 and 9 respectively, Wilson and Stacey cruised through their group with 3-0 wins over Edgar Mataro and Ricard Sabio Ruiz of Spain, Ma Lin and Nathan Pellissier of Australia and Luka Trtnik and Alen Becirevic from Slovenia.

A 3-0 quarter-final victory over the experienced Hungarian pair of Gyula Zborai and Andras Csonka took them to the semi-finals where, despite dropping the second set, they came out strong against Piotr Grudzien and Igor Misztal from Poland , 3 -1.

McKibbin and Shilton advanced from Group 4 after beating Jaime Jara Hernandez of Chile and Marco Makkar of the United States 3-0, Zborai and Csonka 3-1 and the Spanish pair of Ander Cepas and Alejandro Diaz 3-1.

They faced Ma and Pellissier in the quarter-finals and recovered from dropping the first set to win 3-1 and set up a semi-final against the French pair of Thomas Bouvais and Class 10 Paralympic silver medalist Mateo Boheas. The first two sets were very close, with the British pair playing superb doubles on key points to edge them 12-10 and 13-11 before running away with the third set 11-3.

In the final, it was Wilson and Stacey who had the advantage and they won the gold medal after a 3-0 victory.

“It was a great competition to play with Josh and get the win in our first competition together,” Wilson said. “I think we worked very well as a team and that was reflected in our results here.

“Going forward I think we can improve and keep getting results like this. It was great to have an all-British final against Aaron and Billy who also had great competition.

“Playing with Ross was a really good experience,” Stacey said, “and I think our games complement each other. I felt comfortable communicating with him and I think when the games got tight, it is what got us across the line.

“The final was a good game to play especially because it was all British and we knew it would be tough because we had lost to Billy and Aaron every time we had faced them in training. I think we went up our level here and that was clearly shown in the final.

“I think overall we had a great doubles tournament,” Shilton said. “Aaron and I usually play really well together which gave me a lot of confidence going into matches. Our performance against France was probably one of the best doubles matches we’ve played together. Bouvais and Boheas are all both the best players in their category, so I was really happy to win this match.

“It’s always difficult to play against your team-mates, but all credit goes to Ross and Josh because they played a great game and I’m really happy that both GB teams were able to qualify for the final.”

“I think the double was good,” McKibbin acknowledged. “We had a dazzling performance against France in the semi-finals and it’s always a pleasure to play with Billy. I think we’re a great team and we’ve proven over and over that we can mix it up with the best.

It was played in a round robin format and after a 3-0 loss to Zsofia Arloy of Hungary and Park Nam-Mi of Korea, Pickard and Williams put in a great performance to beat Sophia Kelmer of Brazil and Katarzyna Marszal of Poland 3- 0. A 3-0 win over Spain’s Ariadna Ardevol and Brazil’s Aline Meneses Ferreira kept them in the hunt for gold, but after a 3-1 loss to French top seeds Morgen Caillaud and Thu Kamkasomphou in their last match, they had to settle for bronze.

Stacey and Pickard started with a 3-0 victory over Mirko Bruschi of Italy and Aline Meneses Ferreira of Brazil, but a 3-0 loss to Piotr Grudzien and Karolina Pek of Poland saw them beat Pablo Romero Parreno and Raquel Mateu of Spain in their last pool match.

A 3-0 win took them to the quarter-finals where they faced another Spanish pair in Ander Cepas and Olaia Martinez. From 2-1 they fought back to level 2-2, then saved two match points in the deciding set before winning the game 12-10 and the game 3-2. They couldn’t quite repeat that performance in the semi-finals and lost 3-0 to Gyula Zborai and Alexa Szvitacs of Hungary.

“To be honest, I was really nervous about the two doubles events,” admitted Pickard, “but actually I surprised myself quite a bit. I think my partnership with Grace grows stronger every time we’re playing and we’re starting to understand each other now and communicate better, which is key.

“Playing mixed with Josh was great – we’re great friends off the table and the support he’s given me has been amazing. It was a great win for us in the quarter-finals and getting a bronze medal is just a bonus.

“Overall, I can take a lot of positives from the tournament. I know exactly what I need to work on and I’m excited to get back to training.

“Playing with Fliss this week has been fantastic,” Stacey said. “Because of the friendship we have off the table, I felt we could relax and try to enjoy it as much as possible. I think it paid off in the quarter-finals after being knocked down and trust yourself to make the right decisions.

Wilson and Williams came from 2-1 down to beat Alejandro Diaz and Maialen Etxebeste of Spain 3-2 in their opener but were then beaten 3-0 by Gyula Zborai and Alexa Szvitacs of Hungary.

They also progressed to the quarter-finals with a 3-1 win over Australia’s Lennard Properjohn and Melissa Tapper, but exited after a 3-0 loss to another Australian pair in Nathan Pellissier and Paralympic champion Lei Li Na.

“This tournament was a great experience for me and a chance to develop as I was with experienced players,” the 18-year-old Williams said. “Playing with Ross and Fliss in doubles was a fantastic opportunity as I learned a lot about the game from a different perspective.”

Sue Bailey teamed up with Cristina Rubio of Spain and they failed to progress from their group after defeats to Giada Rossi and Michela Brunelli of Italy (3-0), Aino Tapola of Finland and Hatice Duman of Turkey (3 -2) and the Italian/Korean pair of Carlotta Ragazzini and Kang Oejeong (3-0).

Bailey and Irishman Colin Judge started with a 3-1 victory over Caleb Crowden and Amanda Tscharke of Australia, but after a 3-1 loss to Primoz Kancler of Slovenia and Andela Muzinic of Croatia, they needed to win their final game against Silva Fabio and Marliane Amaral. Santos from Brazil.

They fought hard and from 2-0 came level at 2-2 but the Brazilian pair edged out the final set 11-9 to advance to the knockout stages.