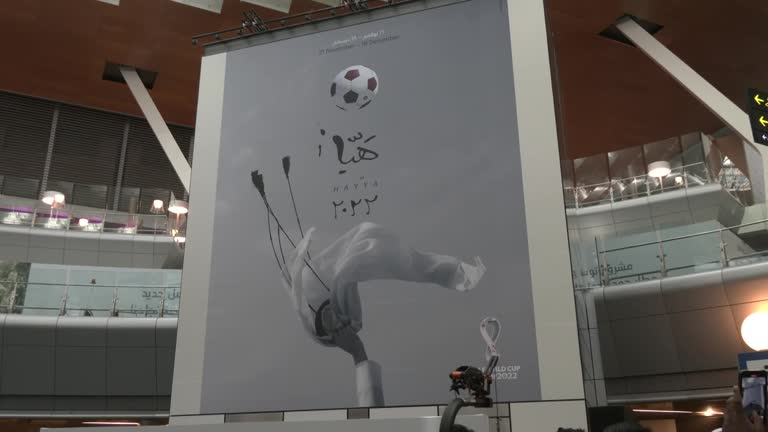 The official poster for the FIFA World Cup Qatar 2022 was unveiled on Wednesday (June 15) during an official ceremony at Hamad International Airport in Doha, Qatar.

The revealed poster depicts a traditional Qatari headgear thrown in the air, a celebratory gesture made by local fans watching the football. Other items included are a soccer ball and Arabic script reading “Hayya”, which translates to “let’s go”.

The design was created by Bouthayna Al Muftah, a graduate of Virginia Commonwealth University in Qatar. The artist also produced seven additional posters which were presented at the ceremony and are currently displayed throughout the airport.

“As you can see, the Ghitra (Arabic word for ‘traditional headgear’) lifted in the air on the main poster is meant to also express this feeling of how people celebrate a victory. So I wanted to show that in an indirect way to represent Qatar and just the feelings of joy,” Al Muftah told Reuters after the ceremony.

A Tuesday (June 14) qualifier between fourth-placed CONCACAF region team Costa Rica and Oceania confederation winners New Zealand at the Ahmad bin Ali Stadium ended the qualification for the 2022 final in Qatar, which will take place from November 21 to December 18.