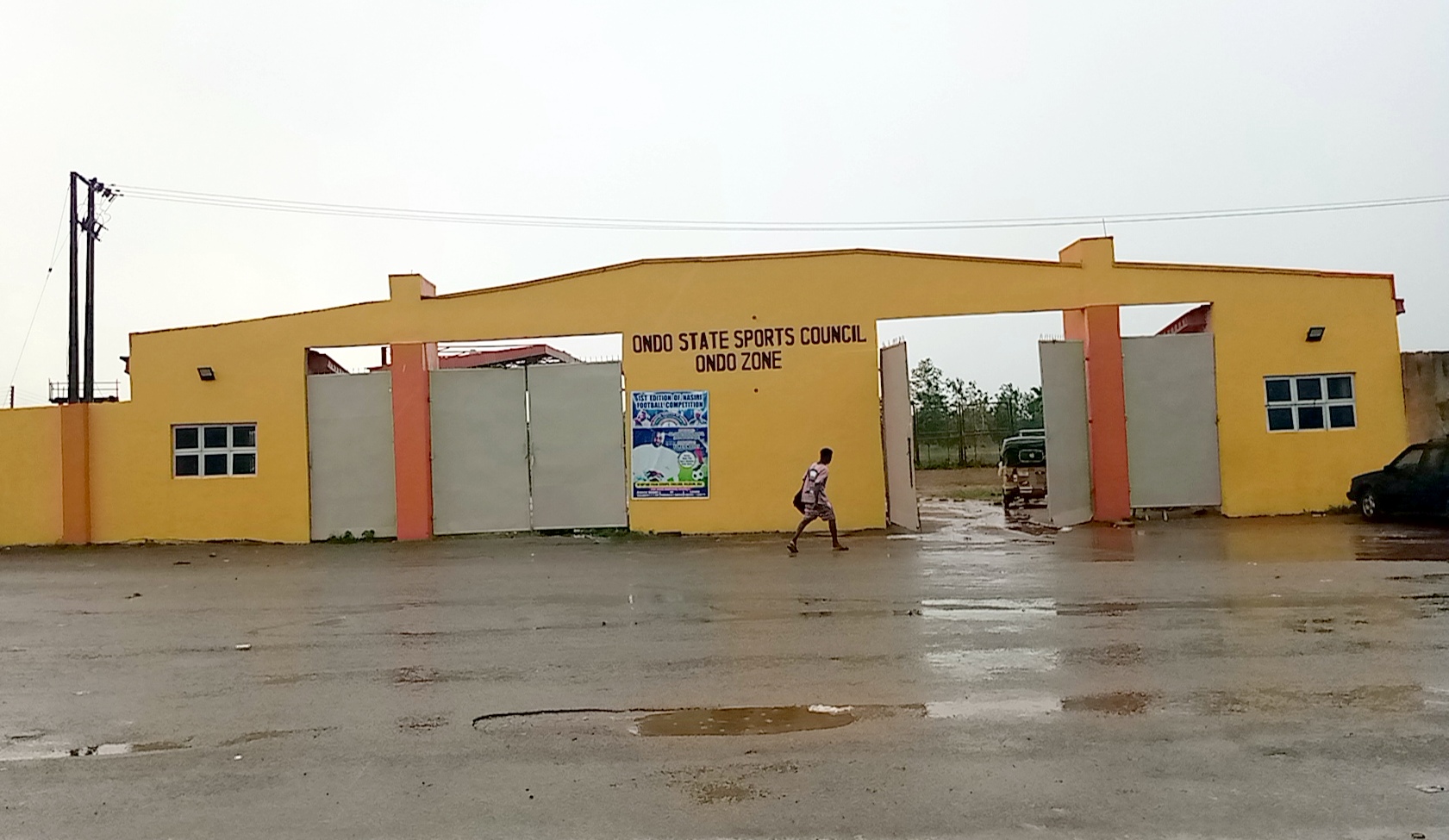 On a Tuesday morning in April, footballers were training on the football pitch of the stadium in the municipality of Ondo. As it was a daily routine, nothing seemed out of the ordinary until heavy rain started and the roughly two dozen footballers started running for cover.

The stands, which would have served as a shelter, have no roof. The roofing sheet, which was recently installed, had been washed away by a storm.

Adeyeju Johnson, a 26-year-old who plays for local club Dominion Football Club, was one of the trotting footballers.

“This stadium has helped us, the local football teams in this city,” said Johnson, who hopes to turn professional one day. “We train and organize competitions, invite other football teams from other local governments for friendly matches and the like.”

He recalled that the stadium was in poor condition before a recent intervention by the Ondo State government to give it a lift. However, he added, the renovation was only cosmetic as the stadium still lacks many amenities.

“During the league matches, there are matches played in the afternoon around 1 p.m. So the fans have difficulty arriving at the stadium because of the scorching sun, knowing that there is no shade under which to stand. put.”

Johnson advised the government to build a durable grandstand and provide seats for spectators.

Built in 1976, the Ondo Township Stadium served as a breeding ground for several athletes from the former city.

In order to strengthen its service, the state government for three years since 2018 has budgeted several million for its renovation.

In total, the state government has budgeted N31 million for the renovation of the stadium. The UDEME could not determine the amount released for the renovation. Such information was not available on the budget portal and in the budget summaries for the years under review. Efforts to obtain the information from the Ministry of Sports did not yield results due to a lack of cooperation from the ministry.

The findings of this journalist show that despite the renovations carried out, the 10,000-seat stadium still lacks basic equipment.

Some stadium users said some transformers were provided during the administration of former Governor Olusegun Mimiko, but were stolen two weeks after installation. There have been no attempts to provide electricity to the stadium since then.

Lucky Emmanuel, a 17-year-old tennis player, lamented how the poor quality of work done was affecting their sports activities.

“When the rain falls, the fans run away. Not everyone wants to be beaten by the rain and there is nowhere to hide. The roof rack fell off,” he said.

Oyinkansola Miracle, a 23-year-old economics student from the city’s Adeyemi College of Education, has competed in numerous out-of-state boxing and running competitions and has been training at the stadium for a few years.

“Besides the stadium helping me compete in out-of-state boxing and running competitions, I’ve also won awards at Eki Day’s boxing competition held at the stadium every year,” she said, calling the state government. make a complete renovation to allow “many talents (to) rise”.

Likewise, Godspower Dorcas, one of the local referees in the city, told UDEME that the stadium gave him the opportunity to improve his refereeing skills. She described the lack of toilets as “inconvenient” while urging the government to intervene.

“To be frank and sincere with you, there is no toilet for the athletes and the one for the referees is not working and we moved to fix it with our money but you know the government. Imagine someone having the A runny stomach is the main reason why a toilet is needed because the person cannot use the weight in the presence of all the athletes,” she said.

Contacted, via a phone call, the Ondo State Commissioner for Youth and Sports Development, Dele Ologun, told this reporter that he could not report on the 2018, 2019 and 2020 budgets placed under the guardianship of the ministry, saying he took office in 2021.

Mr. Ologun added that he was not sure if the project documents were with the ministry, noting that if this reporter needed information regarding projects from previous years, he should contact the former commissioners of the ministry.

“My brother, the ministry or I are disabled and could not give you the adequate information needed, if the money was released, the contractor who got the project and what are the things that should be done , as I took office last year and the projects which I can give adequate information on those named or captured in the 2021 and 2022 budget documents.”

UDEME contacted the former commissioner, Dotun Owanikin, for a comment, but he redirected the journalist to the outgoing commissioner. Mr. Owanikin served as Commissioner between 2019 and 2020.

UDEME attempted to contact Saka Ogunleye, the commissioner who served in 2018, but his known phone line was unavailable.

Support the integrity and credibility journalism of PREMIUM TIMES

Good journalism costs a lot of money. Yet only good journalism can guarantee the possibility of a good society, an accountable democracy and a transparent government.

For free and continued access to the best investigative journalism in the country, we ask that you consider providing modest support to this noble endeavour.

By contributing to PREMIUM TIMES, you help sustain relevant journalism and keep it free and accessible to everyone.