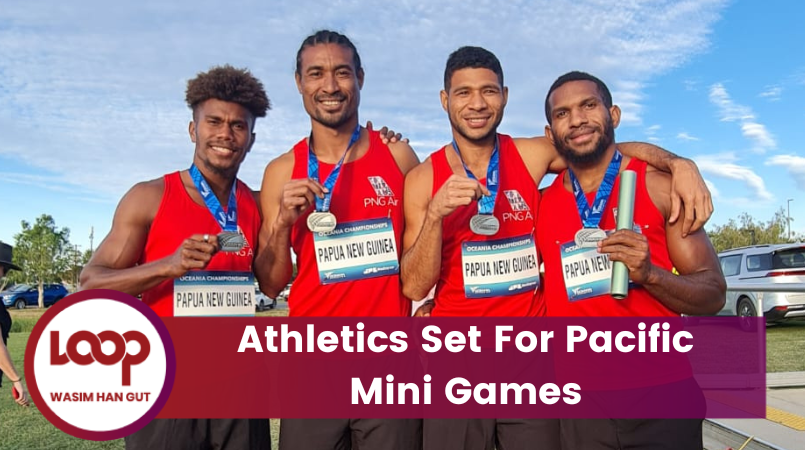 The team of 24 male athletes and 14 female athletes will travel to Saipan in three groups this weekend from Port Moresby, Brisbane and Los Angeles.

Thirteen US-based athletes and coach Nelson Stone will fly to Saipan via Honolulu and Guam, with a stopover in Los Angeles this weekend for a final preparatory competition.

Twenty athletes competed at the Oceania Championships in Mackay, Queensland, this week and highlights so far have been a national record 53.33m in the men’s discus for Debono Paraka; an outstanding 10,000m performance by Siune Kagl; and a superb 400m time from multi-event athlete Karo Iga.

PNG is poised for a strong showing in the men’s long distance events, particularly the 3,000m steeplechase and 10,000m.

Pacific sprint queen Toea Wisil is not in her best form and her recent times have been well below her best however she remains determined to give her best at the Games.

PNG has good support in the sprints with Leonie Beu and Isila Apkup.

In the men’s sprints, the big question will be whether Banuve Tabakaucoro of Fiji can withstand the challenge of Leroy Kamau and the other PNG sprinters over 200m.

Fiji relied heavily on their star sprinter at the last Pacific Games, but like Wisil, his recent times have fallen short of his best.

“Tabakaucoro has improved in the 100m with every race and he will be the man to beat in this event, however, not much is known about his form in the 200m and it will be interesting to see if his experience will carry him through. through what is sure to be a tall order,” said APNG President Tony Green.

“Rellie Kaputin has only recently returned to Australia to prepare for these Games and is a little rusty after nine months back in PNG. However, there have been no Pacific Islanders close to Rellie in the horizontal jumps in recent years apart from Annie Topal and PNG’s hopes will once again rest on the East New Britain pair to claim gold.

National record holder Peniel Richard will be one of the favorites in the men’s triple jump and PNG will have three men competing in the long jump, including Roland Hure, who won gold in 2017, Richard and Eldan Toti.

“Multi-competitors, Edna Boafob and Karo Iga have both shown good form since arriving on the Gold Coast at the end of April for a training spell, with Boafob showing good progress in the 100m hurdles and long jump,” Green pointed out.

“These events combined with his strengths in the 200m and 800m should allow him to post a much better score in what will be his first heptathlon since his debut in this event at the 2019 Games.

“Iga should be very competitive in the men’s octathlon after showing good form in a series of events recently.

“He ran an outstanding 400m in 48.68 seconds at the Oceania Championships on Tuesday this week.”

Chairman Green thanked sponsors PNG Air, Kumul Consolidated Holdings, the National Institute of Sport and Prima Smallgoods for their support in preparing a very strong team for the Games.

He expressed confidence that the team will improve on their gold medal tallies from Vanuatu 2017 and Samoa 2019 and gave special thanks to PNG Sports Foundation CEO Albert Veretau for his support of the athletes who camped out at Port Moresby.

He added that the preparation for these Games has been extremely difficult for the sport and thanked the team leaders, Kylie Martins and Sharon Atuai, for all their hard work.

“Fingers crossed that all team members safely navigate the minefield of COVID-related travel requirements at this time and reach Saipan smoothly.”

A skewed selection policy for the Commonwealth Games, litigation and a lose-lose situation