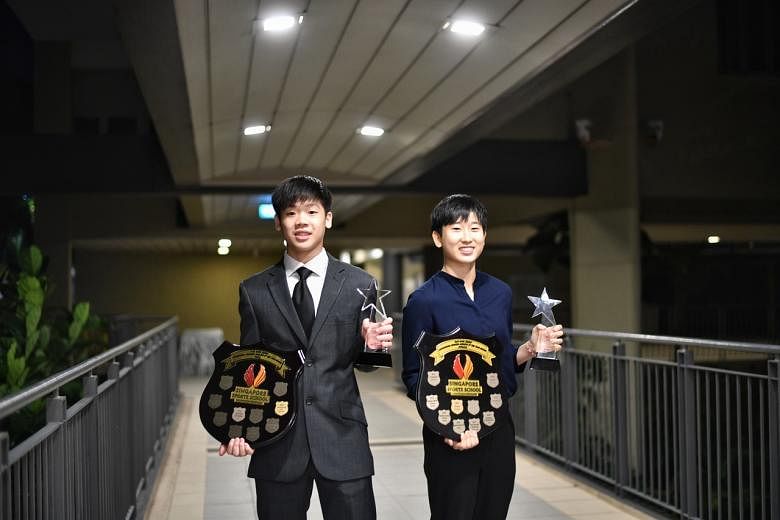 SINGAPORE — After a stellar 2021 season that saw them win numerous medals, young paddlers Izaac Quek and Zhou Jingyi were rewarded with promotion to the national team earlier this month.

And the new year promises to be even better after receiving the Moo Soon Chong Outstanding Student-Athlete of the Year (Secondary) award on Wednesday January 26 at the Singapore Sports School Awards Night.

“It really motivated me because I didn’t have a lot of success (before) except being number 1 in the world, so that meant I was going in the right direction, said the secondary 4 student, who aims to qualify for the Commonwealth and Asian Games and World Team Table Tennis Championships this year.

His teammate Jingyi also has a busy year ahead after breaking into the national team. The 16-year-old, who was the youngest member of the squad that retained Singapore’s bronze medal at the Asian Table Tennis Championships last year, admitted the transition hasn’t been easy as she had to change her style of play, which prevented her from being able to sustain rallies for as long as before.

Zhou, who is now a full-time player, said, “I thought it was a normal process…Things will slowly pick up and it’s better now, so it’s a good change.”

She will compete in three WTT Youth Contender events in Europe next month, where she hopes to medal or reach the final, before focusing on her medal goal at the SEA Games.

She added: “Most importantly, I hope I can get more exposure and see how adults and people who are better than me are playing so I can learn from them and become a better player myself.”

Hooi, 21, picked up the biggest title of her career last September, winning the women’s singles at the Poland international.

She said: “Winning (the title) was really good, but looking back on it, I’m also really happy with the progress I’ve made because we’re always focusing on something to improve on and when I’ve won, I I felt like what I did is good and it motivates me to be better.”