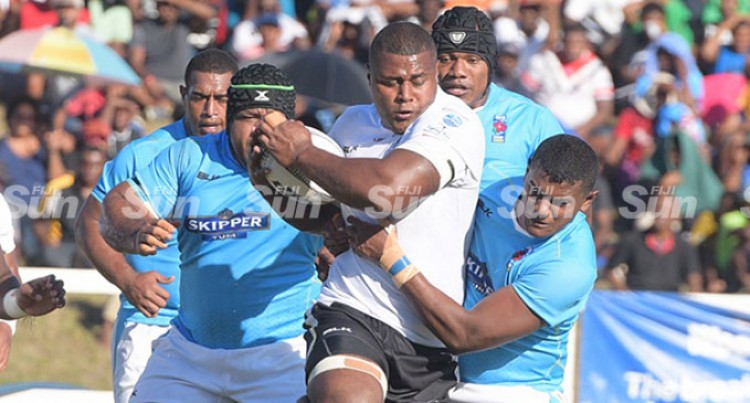 Fiji Rugby Union chief executive John O’Connor said: “We have received a request from Fijian Drua to run the Skipper Cup competition alongside Super Rugby. This is in case they need players to join them in case of injuries.


Swire Shipping Fijian Drua teammates Timoci Sauvoli for Nadroga with the ball in hand is tackled by Tuifagalele Sorovakatini of Suva during a Skipper Cup match between Nadroga and Suva on July 25, 2020, at Lawaqa Park, Sigatoka .Photo: Leon Lord

Fiji Rugby Union chief executive John O’Connor said: “We have received a request from Fijian Drua to run the Skipper Cup competition alongside Super Rugby. This is in case they need players to join them in case of injuries.

“The challenge now is for local players playing in the Skipper Cup to meet the set standards.”

Last week, some teams played warm-up matches as part of their preparation for this year’s season.

“This will increase the performance of our local players as they will aim to be part of the backup players for Swire Shipping Fijian Drua.

In an early interview with Sunsports Flying Fijians head coach Vern Cotter urged team coaches and coaching staff to lift their conditioning program to help pick up the pace for provincial and international games.

“Standards need to be set with a new mindset that pushes players to maintain good nutrition,” Cotter said.

“Strength and conditioning coaches should prepare a good training program for teams,” he said.

“They should set the standards by making sure the players are able to increase the pace and tempo of the game.”

Cotter pointed out that set pieces were an important part of the game that needed to be watched.

“It is time for our local teams to take the lead in pushing the cart forward to establish a good platform for the release of Super Rugby.

Meanwhile, the local rugby big boys are out doing their pre-season training and warm-up matches.

The results of the warm-up matches indicated how interesting the competition will be this season.