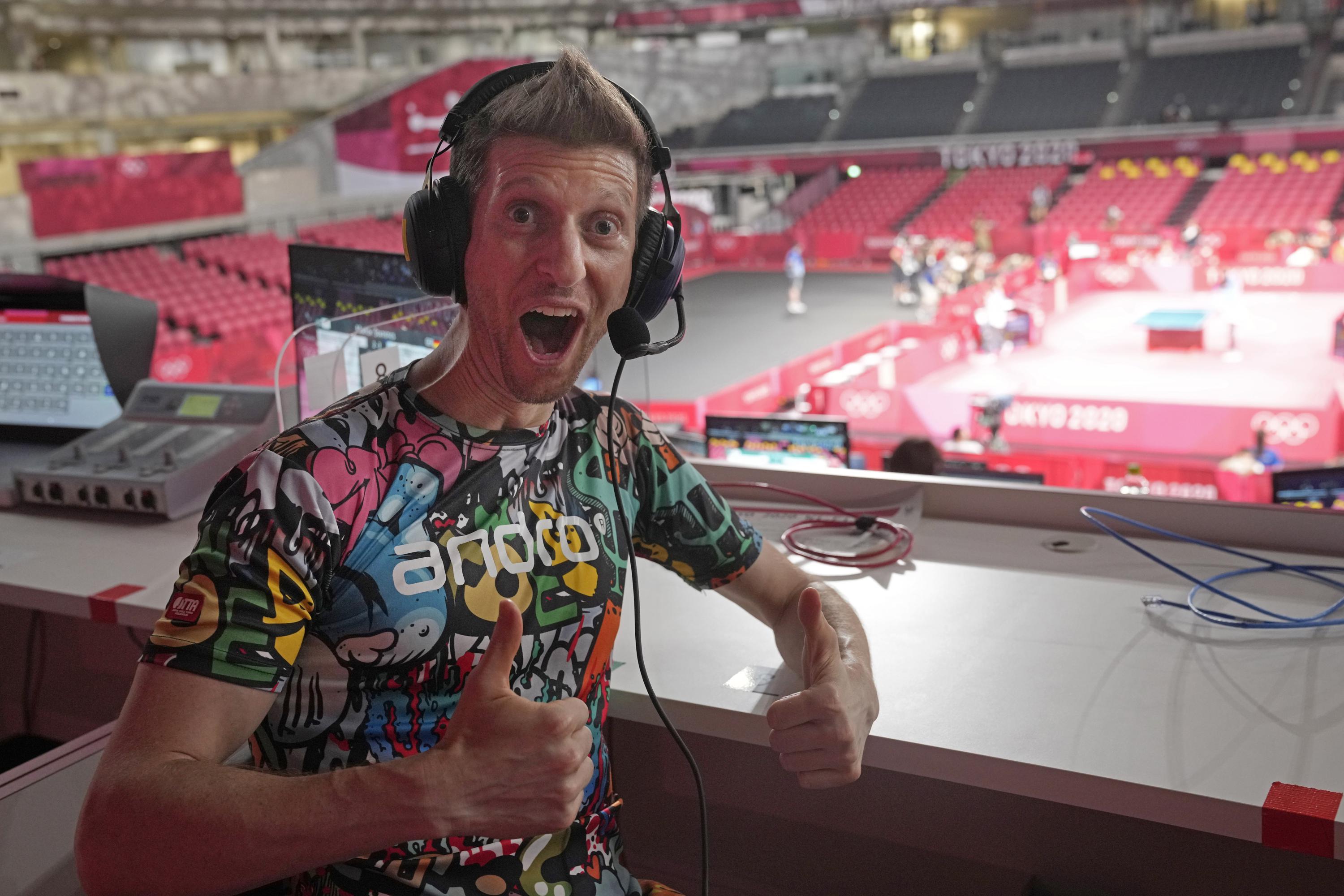 TOKYO (AP) – The Voice of Table Tennis, aka Snakeman, isn’t quite at the top of the sport he loves. Maybe three levels below the US national team, he says.

But Adam Bobrow remains very good, able to hang on, for some rallies, at least, to the best. More importantly, perhaps, he has an arsenal of tricky spin shots – including the Snake, which explains its nickname. All were captured on YouTube and watched by millions, leaving opponents speechless then, as the savagery sets in, delighted.

What he really enjoys, however, besides his main job as a lead commentator for the International Table Tennis Federation, is to travel the world as an ambassador for sport – part serious evangelist, part artist clown prince, fully invested in showing the world the delights of what he considers the best game there is.

“There is an endless amount of possibilities at any given time, and the spinning of the ball can make it bend, jump, kick, bend. It’s like magic, ”said Bobrow, speaking to The Associated Press during the Olympics between commenting on an exciting table tennis tournament that saw Chinese power reign supreme. Again. “It’s like a real-time puzzle that involves speed and strategy.”

Bobrow’s passion for the game, which is contagious, comes with a certain amount of self-promotion. In fact, he is the reason this story exists. He walked into the PA office in the main Olympics press center this week and said, in fact, “Write about me!” “

Bobrow, an American who lives in Taiwan and has also worked as an actor, often favors multicolored neon shirts and pants with designs that resemble paint splatters on a canvas. It’s part of his goal to amplify his sport – and himself.

“The more table tennis grows, the more I grow with it. I don’t think that’s a bad thing, ”Bobrow said when asked about his push for media coverage. “If my channel (YouTube) gets a million subscribers by the end of this year, it’s good for table tennis because it means more people are watching table tennis.”

The video featured on Bobrow’s channel, titled “A Year of Ping Pong,” has over 17 million views and shows him playing against people around the world.

The games look fun, and the victims of Bobrow’s spin shots are generally delighted with the magic. Bobrow has an endearing habit of saying “good” when trying to return an opponent’s winning shot. He plays a point mostly sitting on the floor and claims it’s “No. 1 in the world for bloodshed in table tennis, ”pointing to the nicks in the head caused by stitches gone bad.

He sees his job as teasing the personalities of star players. Athletes need an ambassador, he says, because they are so busy working on their games that they have little time to develop their brands.

After losing in a video to No. 7 player in the world, Lin Yun-ju of Taiwan, Bobrow hangs out with Lin and his family, goes to stunts, plays tennis, dines. Bobrow seems genuinely elated when someone on the street in Taiwan recognizes him.

In another video, he challenges two very gifted Japanese sisters, Miku Matsushima, 6, and Aira, 3. He is especially thrilled when Miku uses a deadly “reverse tomahawk” serve. After table tennis, the girls give her a “massage” – piling clothes on her head and jumping on her back, laughing.

Bobrow has been the ITTF’s main commentator since 2014, when he won an online competition in search of the “voice of table tennis”.

“I don’t have a very large vocabulary because I don’t like reading very much. So I can speak in very simple terms, and I can break the game down in a very simple way, ”he says. “Even if you are not a competitor, I hope I can make it exciting and engage viewers, pique their curiosity by saying, ‘Oh cool, interesting, I didn’t know that’, or, ‘Oh fascinating. , it spins as fast as a NASCAR tire.

Maybe the secret to Bobrow’s online success is that people just love to play with him. This was evident on a recent trip to a table tennis club in Tokyo.

First with a journalist who couldn’t remember the last time he played, then with the talented club manager, finally with a young woman who had just started playing, he seemed to bring out the best in each of them. his opponents. His acting encouraged long, hypnotic and satisfying exchanges that often ended with one of his incredible rigging, followed by a laugh or a stunned and amazed gaze from the victim.

“I can hit a ball that goes up in the air in one direction, goes down in the opposite direction, and bounces in another direction. Now physics can explain it, but most people don’t believe it when they see it, ”Bobrow says. “The pros, at any time, can hit a ball in a way that will cause it to bend, kick, dive and dive.”

When the pandemic permits, Bobrow, who describes himself as “extremely social”, plans to continue traveling the world, both for ITTF commentary and to meet people. He wants to add to the more than 45 countries he’s been to and the tens of thousands of games he’s played. Until then, as the Snakeman likes to say in his videos, he will continue to pong.

Foster Klug is the Associated Press news director for Japan, Korea, Australia, New Zealand and the Pacific Islands, is on assignment at the Tokyo Olympics covering, among other things, table tennis . Follow him on Twitter at https://twitter.com/APKlug. More AP: https://apnews.com/hub/2020-tokyo-olympics and https://twitter.com/AP_Sports