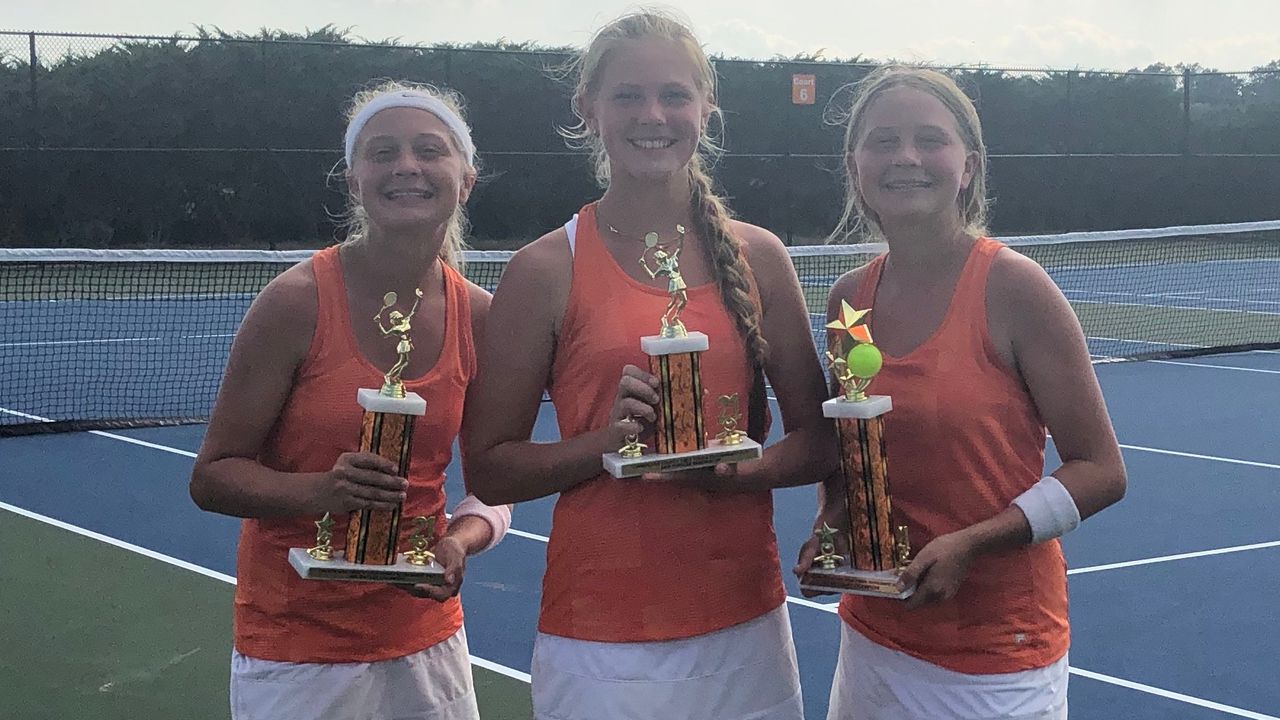 Hitting a tennis ball against the wall, according to Isabella Albert, becomes boring after a while.

Lucky for her, she has two reliable training partners who are always ready and capable whenever she wants to hone her game.

With their hard work ethic, infectious personalities and unwavering support for one another, the Albert sisters are taking the local tennis world by storm this fall. All three secured starting spots at the Cumberland Regional for the first time and helped the Colts move up to a 5-2 record.

â€œThese are my # 1 supporters and it’s great to have them here,â€ said Grace, a second year and older sister of first year twins Isabella and Gabby. â€œIt’s nice to have two people who I’m still with. I like to be with them.

â€œIt’s actually going really well,â€ Gabby added. â€œI see them every day and they are great supporters. They’re a big part of my life so it’s really fun. They are my # 1 fans.

Cumberland returned six starters from last year’s sectional championship squad and thought he had his roster in place, but the Alberts had other plans. Grace, who only appeared in one varsity doubles game last year, made the jump to the second single and finished second in her group at the Cumberland County tournament last weekend.

â€œI worked my best in the offseason and did my best to get here,â€ she said. â€œIt shows that if you put in the time, your results will show it. It was backstage and no one really knew what I was doing. Then I showed up and claimed my place, so I’m very proud of myself.

Of course, there was an extremely difficult challenge match along the way. Grace had to go to three sets to beat Isabella, who settled for third in singles.

â€œThere is so much competition at home,â€ said Grace. â€œIsabella and I, the second oldest of the sisters, we had to play against each other and it was a big (topic) at home. There was a lot of conversation around a table like “I’m going to beat you”. ‘No, I will beat you.’

â€œWe ended up playing a tiebreaker because I won the first set and she won the second set. Then we had to wait until the next day to play a third one, so we came home and we were like, “We have one last set and I’m coming to you.” It was very scary and exciting. She acted like she was going to beat me, I acted like I was going to beat her, and we both went out and did our best.

Despite being a rookie, Isabella has shown she has what it takes to land a coveted bachelor job.

â€œIt was intense,â€ she says. â€œI was very competitive. At home I beat her, but when we played she was a whole different person and she beat me.

Isabella and Gabby, who play the first doubles with senior Amanda Volk, won first place trophies at the county tournament. Gabby gives a lot of credit to their father, Gary, who inspired them all to play tennis.

â€œI wasn’t expecting that because there are a lot of great seniors who have been training for years, since they were freshmen,â€ she said. â€œBut we worked hard on the tennis court near our house from 5 to 7 in the morning. My dad trained us and I think that led us to go to university. We have worked a lot. “

The family, which also includes a sibling in the seventh grade, get along well for the most part, though the twins in particular will have disagreements from time to time.

â€œWe are very close,â€ said Isabella. “Every time we fight, two seconds later, we say ‘I love you’ and we kiss. That’s how we are. We barely fight and we love each other. She’s the best thing. that is.

â€œI love having a twin,â€ Gabby added. â€œWe face each other sometimes, but after five minutes we are sad that we are not together and then we hug. â€¦ We are best friends.

The feuds rarely last on the tennis court, according to Cumberland coach Ashley Evans.

â€œI hardly ever hear them fight,â€ she said with a smile. “They get along very well and they are all very mature.”

Evans is pleased with the progress the three sisters have made in such a short time and can’t wait to see what they can achieve throughout their careers.

â€œIt’s great to have them,â€ she said. â€œThey’re all so young, a sophomore and two freshmen, so that makes me excited for the next three years. I can work with Grace another two years and Bella and Gabby another three and watch them improve. I have told them all, since we started this summer in June or July, that I have seen improvement in them since then. It’s really exciting because they come here and they want to learn, they want to improve and they want to know what they can improve. They work hard and they always give 110% every day, in a practice or a game.

MORE SISTER TALKING: Adonai Martinez was a two-year-old starter for Millville who had a strong senior season in the first doubles for the 2019 Thunderbolt team who went 17-8.

Now her younger sister, sophomore Arielis, is making a name for herself as Millville’s second single, a place she first earned last year as a freshman. She is 5-3 in tag team games and placed first in her class at the Cumberland County tournament.

Adonai played a big role in its development.

â€œMy older sister also played tennis and my mom wanted me to follow in her footsteps, so she started training me,â€ Arielis said. â€œI still play with her and admire her the most since she was the oldest. We play three times a week with a family friend and we trained hard.

NEWS AND NOTES: Two of Gloucester County’s top teams will face off on Friday when Clearview travels to Gateway. The Visiting Pioneers are 7-1 and the Gators 6-2. They have combined for the last three team titles at the county tournament. â€¦ Schalick sophomore Rachel Irizarry continued her impressive freshman season – when she went 10-2 in the third single – compiling a 6-1 record to date in second place.

The NJ High School Sports newsletter now appears in mailboxes 5 days a week. Sign up now and be the first to get all the boys and girls sports you care about, straight to your inbox every day of the week. To add your name, click here.

Thank you for relying on us to provide journalism you can trust. Please consider supporting NJ.com with a subscription.