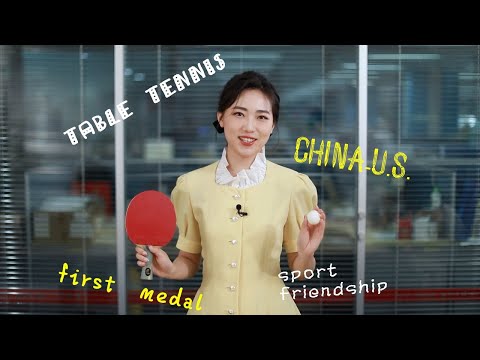 Rubber paddles and plastic bouncing balls, are you a fan of ping pong, or ping pong? Just a few days ago, the 2021 World Table Tennis Championships ended in Houston. Outside of matches, the Chinese-American pairs participating in the mixed doubles competition attracted a lot of attention. from China World champion Lin Gaoyuan teams up with American player Lily zhang, while Tokyo Olympic champion Wang Manyu played with a 21-year-old Kanak Jha. Both pairs performed well. Lin and Zhang won bronze medals.

But this is not the first time that China and the United States was bound by little ping-pong balls.

Back in 1971 at the table tennis world championship in Nagoya, JapanAmerican table tennis player Glenn cowen accidentally boarded the Chinese team bus. At that time, the two countries had not yet established official diplomatic relations. After a few minutes of awkward silence, Chinese player Zhuang Zedong reached out to Cowen, greeting him and presenting him with a screen-printed portrait of the Huangshan Mountains, a famous product of Hangzhou. Later that day, journalists around the world were surprised to see two players from China and the United States side by side with smiles on their faces. This accidental meeting broke the deadlock China– American diplomatic relations. Soon after, the U.S. table tennis team was invited to visit China. Following that of Henry Kissinger secret trip to the country a few months later, that of Richard Nixon 1972 tour and the publication of the three Sino-American joint releases in Shanghai, bilateral relations have returned to normal.

Half a century ago, the warm friendship sparked by ping-pong melted the ice between China and United States. Today, table tennis is once again participating in the development of their bilateral relations. The “sequel” to ping-pong diplomacy 50 years later tells the world that Sino-US relations are based on “coopetition” (cooperation + competition) rather than hostility, and that people should embrace it. communication rather than cold war thinking.

In the past, China also teamed up with players from Germany and South Korea for mixed doubles competitions at the World Table Tennis Championships. For these twinned teams, communication and friendship are more important than the end results.

The world faces multiple challenges, and many uncertainties remain about China-American relations. Perhaps the little ping-pong ball can once again make a difference in the course of world development. We are looking forward to more interactions between all countries and hope to deepen understanding through communication. In this way, we can seek common ground while reserving differences and moving forward together.