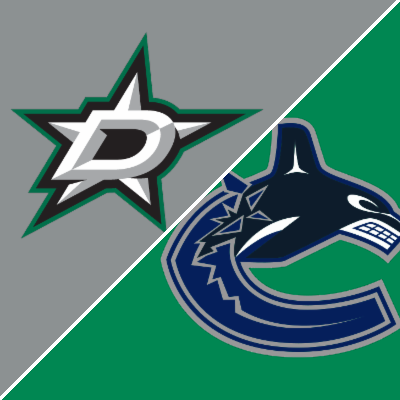 VANCOUVER, British Columbia — — Elias Pettersson had two goals and an assist as the Vancouver Canucks extended their winning streak to six games with a 6-2 win over the Dallas Stars on Monday night.

Brock Boeser and Jason Dickinson each had a goal and two assists for the Canucks. Vasily Podkolzin and Conor Garland also scored. Oliver Ekman-Larsson had two assists.

Coming into the game, Dickinson has eight points (four goals, four assists) in 55 appearances this season.

“But a coach early in my career told me not to fall in love with myself. So I’m enjoying it for now and then tomorrow, back to business, forget what happened tonight. But also remember the confidence that I played with and it’s there, the ability is there.

“You can have a bad year, then you can fix that bad year in a few good weeks in the playoffs,” Boudreau said. “He’s smart enough to say ‘OK, I’m going to put this behind me, which hasn’t gone well this year. Let’s just worry about what’s in front of me and if I can do any good with what’s on front of me.

Roope Hintz scored two goals for Dallas, including one shorthanded in the second period.

Thatcher Demko stopped 28 of 30 shots for Vancouver, which swept the three-game season series against Dallas.

Stars goaltender Jake Oettinger stopped 15 of 19 shots before being called out midway through the second period. Scott Wedgewood made 10 relief saves.

The Canucks are five points behind the Stars in the Western Conference standings, with Dallas holding the wildcard second spot. Vancouver is also one point behind the Vegas Golden Knights, who are chasing the Los Angeles Kings for third place in the Pacific Division, a berth that also comes with a playoff spot.

With five games left in the regular season, Vancouver’s locker room players believe they have a chance, Garland said.

“We are just focused. We understand what we have to do,” he said. “You can’t take your foot off the accelerator. We haven’t given ourselves an easy path to the end of the season here, so we understand it’s a daunting task compared to what we have to do. So we are focused and want to continue.

The Stars pulled out Wedgewood with nearly five minutes remaining in regulation time for an extra forward, but failed to get past Demko.

Pettersson scored in the empty net with 3:01 left. It was his career-high 29th goal of the season.

The third period had lasted just 49 seconds when Podkolzin made it 5-2 for Vancouver. The Russian rookie fired a sharp-angled shot from the bottom of the face-off circle, finding space behind Wedgewood and sending a shot into the back of the net.

Vancouver’s lead increased to 4-2 midway through the second when Dickinson scored against his old team.

A long period of pressure in front of the Stars net ended when the cross tipped in a long shot from Boeser at 10:33.

Dallas sent Dickinson to Vancouver ahead of Seattle Kraken’s expansion draft last summer. He then signed a three-year, $7.95 million contract with the Canucks.

Oettinger got the hook after Dickinson’s goal and Wedgewood took his place in the net.

Oettinger has scored a few bad goals, but the team has faith in him, Stars coach Rick Bowness said.

“It’s up to the rest of the guys to fight back and give them a bit of race support and we didn’t do that,” he said. “One power play goal, one shorthanded goal and that’s all we have. Your goalkeeper gives up a bad goal, try to bail him out.

The Canucks got their first power play of the game after Tyler Seguin was called off for holding the game early in the second period, but it was the Stars who found the back of the net.

Pettersson tossed a puck down the boards and Hintz got ahead of him, sprinting for a breakaway and firing a shot past Demko to make it 3-2 with his second of the game.

A goal early in the second quarter added to Vancouver’s cushion.

Dickinson used a pass to spring Pettersson and Boeser for a 2-on-1 break, and Pettersson looked ready to fire until the last moment when he sent a pass to Boeser.

The right winger dropped to one knee as he tore up a one-timer past Oettinger for his 20th goal of the season. Boeser was playing his first game since April 3 after missing three in a row with an upper-body injury.

A one-on-one play by forward Sheldon Dries gave the Canucks a 2-1 lead midway through the first quarter. He sent a short pass to Pettersson behind the net and the Swedish star wasted no time in placing a backhand shot between Oettinger and the post.

Hintz tied the score at 1-1 with a power-play goal after Boeser was called for cross-checking Ryan Suter in the neutral zone.

The Canucks flipped the puck down the boards and Joe Pavelski fed it to Hintz as he stormed into the crease. Hintz picked his spot and fired a wrist shot into the top corner of the net at 8:12.

Just 44 seconds earlier, Garland opened the scoring with a slapshot from the other side of the face-off circle. The left winger has points in six consecutive games, with three goals and five assists throughout the sequence.

Game Notes
Alex Chiasson was eliminated late for the Canucks with a non-COVID illness. The right winger took the warm-up but was replaced in the lineup by Nic Petan. Chiasson had a five-game point streak with five goals and four assists. … All-Star defenseman Esa Lindell also missed the game due to non-COVID illness. … Vancouver was without captain Bo Horvat. He will be out for at least two weeks after sustaining a lower-body injury against the Coyotes on Thursday.

Dallas: At the Edmonton Oilers on Wednesday in Game 2 of a three-game road trip.

Changes in vegetation have shaped global temperatures over the past 10,000 years