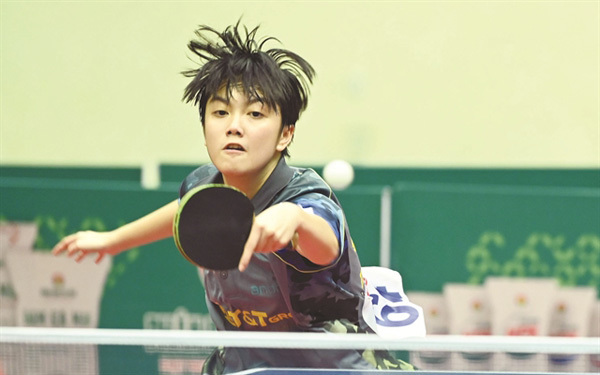 Tran Mai Ngoc jumped in the air and shouted in celebration of his championship point. She had just become the second youngest national champion at the age of 17 and proved to be the future of Vietnamese table tennis.

Ngoc rose through the ranks faster than coaches expected, taking just eight years to reach the national podium. From now on, she will be a key athlete in helping the country achieve the best results in international tournaments.

The teenager’s next task will be the women’s singles gold medal at the 31st Southeast Asian (SEA) Games in Hanoi. It’s a title that Vietnam has yet to win in the biennial competition.

Journey to the top

Born in Binh Duong province, Ngoc and her twin sister Tran Ngoc Nga were orphaned at the age of two. They lived in poor conditions with their mother, a garment worker.

Despite a difficult life, the mother sent the girls to a local table tennis club, which quickly became an unwavering passion for them. They were then introduced to the Hà Nội T&T Club, which offered free training lessons for poor junior athletes.

“I didn’t know if they could play table tennis, but it was Hà Nội T&T’s charity program, so I accepted them,” coach Vu Manh Cuong said.

“The mother and two nine-year-old daughters traveled to Hanoi with us. When she got home, the children cried a lot. And we had to take turns taking care of them. They stayed at the club, have practiced with us and only visited their hometown once a year. Time flies. It’s been almost a decade.

Under the three-time SEA Games champion, the girls, especially Ngọc, made remarkable progress and showed their talent in many junior tournaments.

Ngoc, 15, was chosen to take part in the national championship in 2019 after his eldest child Nguyen Thi Nga, who was defending champion, was unable to join him. The tournament’s youngest competitor made an impressive debut with three silver medals, including one in women’s singles.

Ngoc’s performance was much better than his coach Cuong could have imagined.

Cuong said he knew his dark horse athlete could do something, but three silver medals at his first national championship was unexpected at such a tender age.

She was the youngest member of Team Vietnam and the youngest competitor at the 30th SEA Games in the Philippines in 2019.

A year later, she came first in the national tournament of the best table tennis players.

The 17-year-old got through the first sets without difficulty. However, she faced a challenge with defending champion Mai Hoang My Trang who defeated Ngoc in the 2019 final. But in their second meeting, Ngoc beat the 12-time winner 4-2 in the quarter-finals.

In the final, Ngoc continued his epic performance to beat Nguyen Thuy Kieu My 4-0 to claim the crown. She is the second youngest champion in the tournament in 39 seasons, the youngest being Nhan Vi Quan who won aged 15 in 1988.

star in the making

“Ngoc has powerful shots like men and her serves are tough. Her drives are also weapons that can create challenges for every rival,” Cuong said.

Speaking to reporters after awarding the gold medal to Ngoc, Phan Anh Tuan, head of the Vietnam Sports Administration (VSA) table tennis department, said VSA officials and those responsible for his club would discuss strong support for Ngoc to reach a high international level. .

He said the talented athlete would have a foreign coach to lift her. Ngoc, who has just completed a two-week training camp in Hungary, will also take advantage of several international camps and tournaments to hone his skills.

“Ngoc showed his strong progress. She is young but chooses an offensive style, which helps her defeat strong opponents. Her championship title is the result of her diligence and strong will,” said Tuan.

“She is lean and has good footwork which allows her to reach the ball quicker and easier which helps her play a wider variety of shots. However, it has some drawbacks. His forehands are good but his backhand needs improvement.

He added that the teenager was a national prospect at the SEA Games in May, where the hosts expect to win at least two gold medals.

Two years ago, after winning silver, Ngoc said she couldn’t believe her eyes, even holding the medal in her hands. “It’s a miracle and I lived in a feeling of happiness for several days after that,” she said.

This time, a golden miracle is in sight for Ngoc: “I’m on cloud nine. Now I want to be on the top step of the podium for the SEA Games.”

Vietnam clinched a silver and four bronze at the 25th SEA Junior and Cadet Table Tennis Championships in Bangkok, Thailand on Sunday.