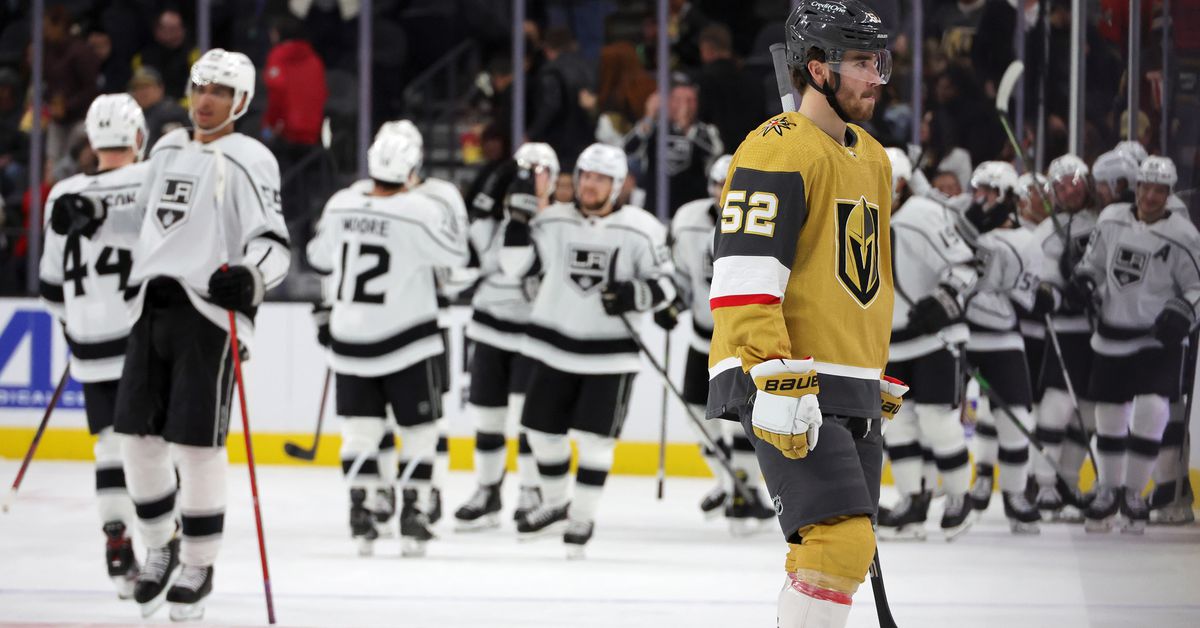 The Knights’ 4-3 overtime loss to Los Angeles on Friday was the team’s third straight loss. It was an improvement after being shut out in consecutive games for the first time in franchise history, but it was another misstep for a team that continues to be consistently inconsistent.

But inconsistency has been Vegas’s watchword for the past seven weeks. Not only have the Knights been inconsistent during games, but their overall results have been all over the place.

The Knights went 1-2-2 to kick off 2022 before picking up back-to-back wins. They lost the next two games and then beat Tampa Bay in a shootout, which was the first of three straight wins, including a 5-2 victory over Alex Tuch and the Sabers as well as a 4-0 win over Edmonton. Then came the current three-game losing streak.

After finishing strong in December on a 7-1-0 streak, the Knights have since traded wins and losses on a regular basis:

All teams have losing streaks, and while it’s a microcosm of a larger problem, the team’s recent three-game losing streak is relatively minor.

But beyond the inconsistent play and injury setbacks the Knights continue to face, the subtle unease surrounding this recurring pattern is becoming ever more palpable due to the larger context of this particular slip-up.

Simply put, the rest of the Pacific Division is waking up, but the Golden Knights have hit the snooze button.

Since Friday night, the four teams within four points of the Knights in the division standings have added two more points to their season totals.

Calgary, Edmonton, Los Angeles and Anaheim all won their respective games on Saturday night; two of those teams are thriving, another is really starting to click, and the final one continues to exceed preseason expectations.

The Flames have won nine straight and outscored opponents 39-14 during that streak; Calgary has scored at least four goals in seven of its last eight games and has gone over five goals five times. Also, since going 6-0 last week, the Flames have acquired Tyler Toffoli to further bolster their offense and forward depth.

The Oilers have won five straight since changing coaches. Edmonton had been on a downward spiral, posting a 3-7-1 record in December and 4-4-2 in January in a streak that included six-game and seven-game losing streaks. But since Jay Woodcroft took over behind the bench, the Oilers are a perfect 5-0-0, have outscored their opponents 22-8 and are finally getting reliable goaltenders.

The addition of Evander Kane certainly didn’t hurt; he had eight points in 10 games while allowing the Oilers to ice three score lines. Zach Hyman has scored three in a row and four of the last five games, and even Connor McDavid has seen his production increase; he wasn’t the problem, but the team is firing on all cylinders and has gone from a discouraged group to a very confident club.

The Knights had a ringside seat the other night for the Kings’ offensive capabilities; Adrian Kempe scored two more goals in a three-point performance last night, helping Los Angeles sweep their back-to-back. Viktor Arvidsson and Phillip Danault give the Kings their best secondary scoring trio since the That 70’s Line, and Danault — best known for his defensive play — set a career high in goals (14) the other night against Vegas. The Kings are 6-2-2 in their last 10 games and have won two of three games against the Knights this season.

Even Anaheim picked up a rebound win last night after losing four straight. Troy Terry notched his 26th of the season to break a four-game scoreless drought, and Trevor Zegras followed up his bid for the Calder with three assists for his second straight multi-point game. Adam Henrique has scored three goals in his last two games with Ryan Getzlaf out of the lineup, and Rickard Rakell has scored four of his last six games. The Ducks scored from all four lines in their 7-4 win over the Canucks, who trail Vegas by eight points in 51 games (Vegas has played in 50).

This makes the race for the Pacific Division very tight.

In fact, the Knights, Oilers and Kings are separated by a single point, and all three (disregarding games in progress) trail Calgary by no more than five.

Edmonton and Vegas are both playing today; no matter what, Edmonton and Los Angeles will still have one game in hand, while Calgary will have three.

If the Knights are unable to come away with two points, that will leave them with 60 points in 51 games.

If Edmonton also loses, the Knights will retain second place in the Pacific, but the Kings will own the tiebreaker over the Oilers for third place. It doesn’t have any lasting implications, but it still gives both teams a lot more motivation to push forward while simultaneously putting a bit of pressure on Vegas.

As for the Ducks, a loss in Vegas will hold Anaheim to three points, but the Knights will have only one game in hand instead of two.

A loss in Vegas will keep the Knights four points behind Calgary, who will earn an extra game in hand, giving the Flames a potential 10-point cushion for first place.

A Vegas to earn tonight would put the Knights within two points of Calgary, even though the Flames will have three games in hand. It would also extend Vegas’ lead to three points over Edmonton (if the Oilers lose) and Los Angeles, who will each have a game in hand.

Hand games don’t necessarily add up to points, but it’s a variable that’s always worth considering.

Either way, the Knights are one or two points away from dropping one of the three Pacific Division playoff berths.

Nashville and Los Angeles currently hold the two generic locations; the Predators have 60 points in 50 games (just like Vegas) but own the tiebreaker with 27 wins in regulation and overtime to Vegas’ 24.

The Knights must turn the tide.

They don’t have to be the best team in hockey in the regular season, but switching between some of the season’s worst efforts and some of the best is no way to string together wins (of any kind). ).

Of course, the playoffs don’t start tomorrow; these scenarios have minimal and temporary consequences. But that doesn’t change the fact that the Knights have been on the brakes while most of the division is stepping on the gas.

It won’t take much for Vegas to right the ship, but it’s a balancing act with the introduction of Jack Eichel, key player injuries and cap constraints and uncertainty ahead of the next deadline. Exchanges.

There are three games left in Vegas this month, starting with tonight’s game against San Jose.

On the surface, it’s a favorable game for the Knights, who hold an all-time regular season record of 16-1-3 against the Sharks.

But each loss gets more costly as the year progresses, and the Knights’ casual play lately won’t do the job if they hope to be a serious contender in season two.

There’s no better time than the present to get off the schneid.

How will the 2021-22 regular season end for the Golden Knights?