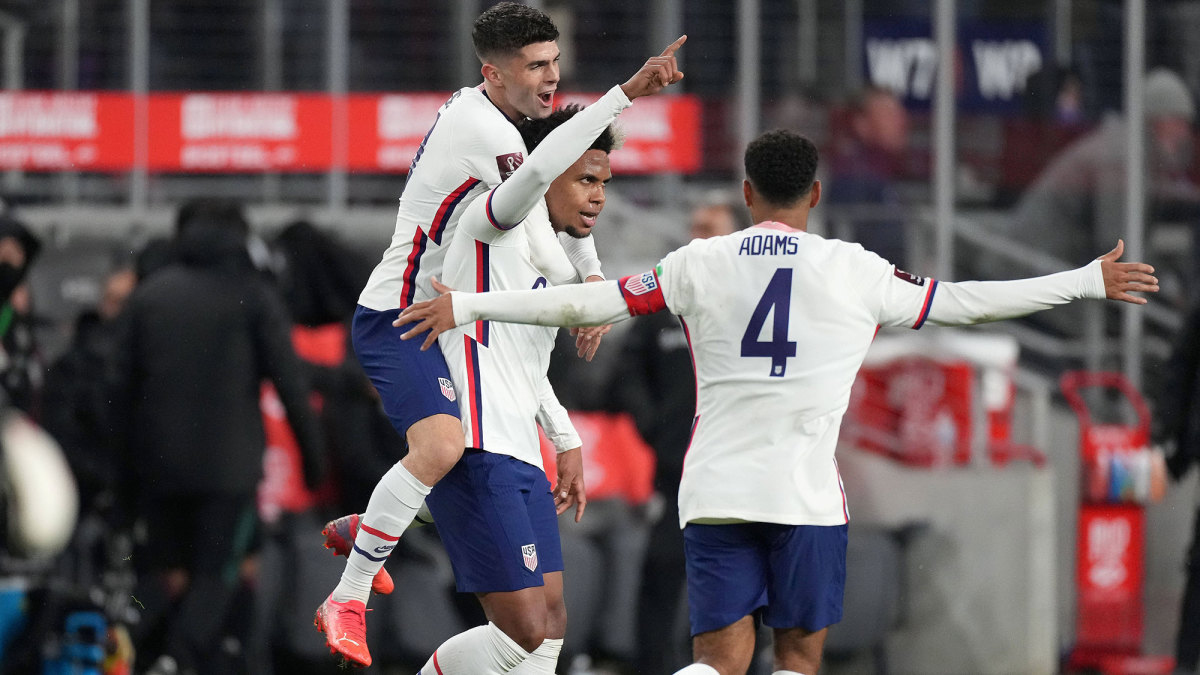 Last we saw of the Americans – at least the first-choice group – they were finishing a four-point qualifying window for November’s World Cup, which included a familiar 2-0 win at home to Mexico before a Satisfying if not unimpressive 1-1 draw. in Jamaica. That left the United States in second place in Concacaf’s eight-team table, where the top three automatically go to the World Cup and fourth in Qatar in June for a playoff game against the Oceania representative for a final spot in the 32-team Champ.

There’s a lot at stake when qualifying resumes next week, with the United States continuing its second round in the regional pool by hosting El Salvador in Columbus, Ohio, facing Canada in Hamilton, Ontario, and then heading home. in St. Paul, Minnesota, for a date against Honduras. It’s the reverse of the opening three-game qualifying window in September, and the points that could bring the United States closer to Qatar are there for the taking, with the two home games against the two worst teams in the chart. No. 1 Canada will be weakened following the announcement of the absence of Alphonso Davies as he recovers from a case of myocarditis discovered following his recent experience with COVID- 19.

But what about the state of the United States? Over the past 10 days, 20 MLS-based players have been training in Phoenix, where they will complete the first part of camp on January 21. Some members of this group will stay and move to Columbus, where they will be joined. by the American contingent based abroad. Given the time of year on the club’s calendar, all are in a different place when it comes to form and fitness. Winter breaks or off-seasons for certain leagues coupled with recent injuries, new transfers, the omicron coronavirus variant and other variables provide a unique set of circumstances for players.

“What we’ve learned is to expect the unexpected,” USA manager Gregg Berhalter said recently. “You never know who will be available to play every game. You have to be ready to adapt. »

With a roster revealed for matches looming on the horizon, here’s a look at where the US player pool stands and where it stands now:

Zack Steffen may still be second-choice at Man City and relegated to the domestic cup, but he will come into this camp finding himself in a rare position: having played a competitive game more recently than Matt Turner. Not like it mattered even when Turner was in season with the New England Revolution. After seeing the reigning MLS Goalkeeper of the Year start the first five qualifiers, Steffen has since gotten the call and should be expected in goal against El Salvador. NYCFC’s Sean Johnson appears to be in the lead for third-place GK, though it’s not set in stone for the long haul; it’s just a product of the current state of competition.

Nations League final hero Ethan Horvath hasn’t played a minute for Nottingham Forest since September 15, while 17-year-old Gabriel Slonina is projecting himself as a longer-term prospect. Including the Chicago Fire youngster as part of the squad heading into qualifying might be a smart move as he weighs his options between the United States and Poland, but Berhalter generally hasn’t suspended the berths. roster that way and would keep Slonina for the trio of qualifiers only if he wins it through his play at camp — where he’s been with Turner and Johnson — for the past two weeks.

At centre, Miles Robinson and Walker Zimmerman were the big winners of the fall, emerging as the first-choice tandem as John Brooks struggled for form at Wolfsburg. But the front two have been out of season since their teams were knocked out of the MLS playoffs in November, and Brooks could find himself in the mix – although not a starting role – with Chris Richards and Mark McKenzie of Europe- based contingent.

Aaron Long’s expedited return is another piece of the puzzle. Brought to camp in November and December to continue his rehabilitation following a tear in his Achilles suffered last May, Long seems to think he will be ready to contribute as early as next week.

“I feel great. I mean, I’m not even eight months yet, but I feel really good,” Long said late last week. I hope – and I had [two] more weeks until qualifying, so yeah, that should be good to go.

“Good to go” might be overstated, especially with Berhalter indicating earlier last week that Long was more likely to be fit for the final three playoffs in March, but if he’s truly back and can feature in its previous level, it is an unexpected bonus.

Overall, things may ironically be settled more on the left than on the right. Antonee Robinson is once again a fixture for Fulham, who sit top of the English second tier and are chasing promotion. Sam Vines has made 10 starts for Antwerp since moving to Belgium, while the versatile Joe Scally and George Bello are the other alternatives. The top two participated in the camp for the last two playoffs but did not play.

On the right, Sergiño Dest hasn’t played for Barcelona which is a bit of a problem. Dest’s last minutes came in the first half of Barca’s Champions League group final against Bayern Munich on December 8. He was injured and had a case of COVID-19, which didn’t help his cause, but it adds a wrinkle for Berhalter as he considers how and whether to use one of his most dynamic players entering the final third. Behind Dest, reliable veteran DeAndre Yedlin hasn’t come off the bench in Galatasaray’s last four games, while Reggie Cannon, on the other hand, has reappeared as a starter at Boavista but is yet to play a game. minutes in qualifying.

Brooks and Yedlin’s yellow cards in the three-match window also require more depth at their respective positions, as one more yellow for either would mean a one-game ban.

Weston McKennie is in his best form of the season for Juventus, with goals in back-to-back games and Tottenham transfer rumors swirling as the January window reaches its second half. He, Yunus Musah and Tyler Adams are in line to command the midfielder, although Adams should be wary of missing out at any time given his yellow card status.

Beyond them, of the reliable MLS trio of Sebastian Lletget, Kellyn Acosta and Cristian Roldan, two were traded (Lletget to New England Revolution, Acosta to LAFC), and, digging a little deeper, James Sands got a loan from NYCFC to Rangers. With the exception of Sands, who makes his Rangers debut on Tuesday, all have been inactive since their clubs’ season ended, leaving only American camp time to keep fit.

Gianluca Busio started well in the fall but has only made one start in Venezia’s last four games in all competitions. Luca de la Torre remains a fixture in Dutch mid-table outfit Heracles, but Berhalter didn’t show much affinity for him in qualifying. Maybe that will change with the off-season second line of central midfielders.

There’s a lot to unpack here, especially in the large areas. Christian Pulisic is in fine form, but has spent time on the pitch for Chelsea recently, classified in the winger and false nine roles instead of operating more exclusively in his usual attacking position on the wing. Gio Reyna, who hasn’t played for a club or country since the USA’s first qualifier on September 2, is likely to be retained until the international break, according to Dortmund coach Marco Rose. Tim Weah was also injured for Lille – although he returned to full training on Tuesday – and is also an injury doubt for the upcoming camp. Brenden Aaronson is uninjured, but Salzburg has been out since December 11 for the Austrian Bundesliga’s winter break, and with the exception of club friendlies, he will have had no game time in the six weeks before the game against El Salvador. (Athleticism reported on Tuesday that Leeds United were looking to buy him during the transfer window and rejected a $20 million offer.)

These are the top four offensive talents in the United States, and there are questions of varying nature about each of them and how prepared they are for the intense games ahead. One wildcard to watch is Konrad de la Fuente, the Marseille winger who started for El Salvador in the first qualifying game but hasn’t returned for any of the subsequent windows.

In the center, Ricardo Pepi moves to Augsburg, where he has looked quite comfortable in his first appearances in Germany, although he is yet to score (and hasn’t scored for anyone since his meteoric fall for USA and goal against Jamaica). The competition isn’t that fierce right now. Josh Sargent continues to fight for Norwich City, while Daryl Dike has just moved to West Brom and is acclimatizing. Jordan Pefok, like Aaronson, has his club on winter break, although his last impression before the shutdown was a four-goal performance for Young Boys in Switzerland. Matthew Hoppe has just returned from a long-term injury for Mallorca, earning his first minutes since September 22 in consecutive brief spells on the bench. This remains Pepi’s place to lose.

The four MLS forwards currently in camp – Jordan Morris, Paul Arriola, Jesús Ferreira and Gyasi Zardes – could all move on to the next phase, especially given the expectation of an expanded squad and the need for more options. Arriola, for what it’s worth, has been linked with a move from DC United to Mexico’s Club América.