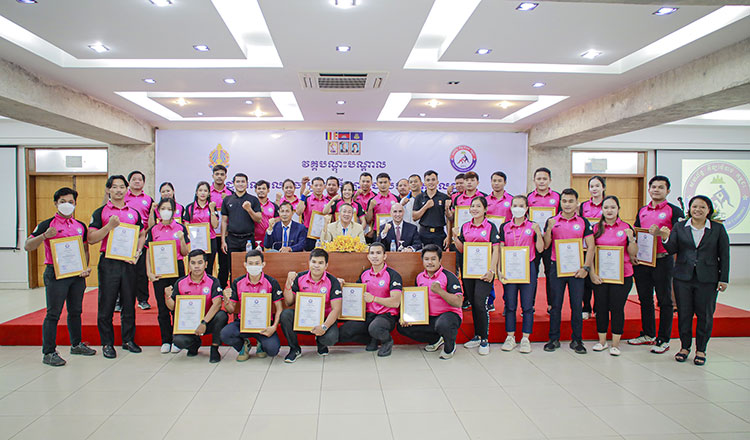 The Wrestling Federation of Cambodia (WFC) is building its capacity ahead of the 2023 Southeast Asian Games with more training for wrestling judges and referees.

The latest training involved 30 participants from Phnom Penh, Kandal and the Ministry of Interior (MOI), according to the National Olympic Committee of Cambodia (NOCC). It was held at the NOCC headquarters in Phnom Penh from September 15 to 17.

The WFC is the latest sports organization in Cambodia to strengthen its training program for athletes, coaches, referees and other sports officials.

During the closing ceremony of the event, NOCC Secretary General Vath Chamroeun said that more training for these sports officials is very important as Cambodia is ready to host the next SEA Games.

“It is very important for our referees and judges to work hard, learn more and develop their skills for the better,” he stressed.

The training was led by a couple of international referees from the Kingdom, Nuth Serey Ratha and Yeung Sovannara.

Chamroeun, who was also a top wrestler before joining the government, said wrestling officials should also keep abreast of international rules and regulations governing the sport.

Chamroeun represented Cambodia in wrestling (men’s freestyle 62 kg) at the 1996 Summer Olympics in the United States. He is also the current president of the WFC.

“They should also strive to become certified international referees to assist in Cambodia’s hosting of the Southeast Asian Games,” the NOCC official stressed.

Wrestling is among 32 sports entered in the upcoming SEA Games, which Cambodia will host for the first time in the history of the Games.

Be patient: the Presidents Cup is going to be great one day soon | Golf News and Tour Information