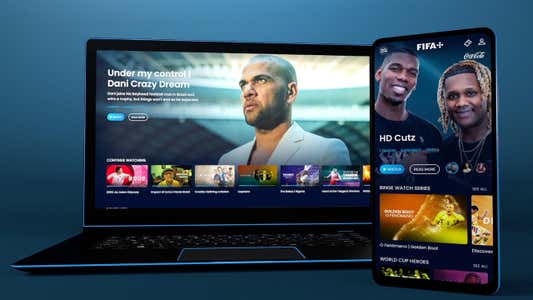 What is FIFA+? The new football streaming service where you can watch matches and documentaries

FIFA+ was launched by the world’s football governing body, with the platform set to provide free streaming to sports fans around the world.

Although the service is similar to Netflix, Prime Video and Disney+, users are assured that it will be subscription-free in the short to medium term.

You’ll be able to watch live matches and original content on FIFA+, with some of the biggest names in men’s and women’s games featuring prominently. Right here, GOAL brings you everything you need to know about an exciting new business.

What is FIFA+ and how does it work?

Much like Netflix, Prime Video, and Disney+, FIFA+ will be available on a mobile app, through a web browser, or through an internet-connected TV device.

It is free and no subscription is required, but it will have pre-roll ads and banners to generate revenue.

It will not replace local media deals, which include TV rights for the FIFA World Cup and Club World Cup.

FIFA hopes the platform will help increase the reach and following of their flagship international and club competitions.

What can I watch on FIFA+?

There will be a host of FIFA+ Originals featuring Ronaldinho, Dani Alves, Ronaldo Nazário, Romelu Lukaku, Lucy Bronze and Carli Lloyd, among others.

At launch, you’ll be able to watch:

There will also be podcasts, news and gaming content on the platform. Additionally, there is a “Creator Network” to encourage football influencers to sign up and create content directly on the service.

Will there be live matches on FIFA+?

There will be approximately 40,000 matches per year broadcast live, which equates to approximately 1,500 per month. It is hoped that by the time the World Cup takes place at the end of 2022, that number will have increased to over 3,000 per month.

It will feature matches from men’s, women’s and youth teams from around the world. The objective is to broadcast 11,000 women’s matches in 65 competitions each year.

Around half of member associations have been contacted to use FIFA+ so far, with all 211 to be contacted by the end of 2022.

The idea is to have a custom homepage for each country that will feature the most relevant content for each audience.

FIFA is willing to bring cameras to matches that are not currently televised, including leagues in Africa, Oceania and Asian territories that are currently not captured.

One example that has been mentioned is the Angolan Premier League, which has no local TV coverage of its league. Alongside this will be content from the biggest footballing nations.

In which languages ​​is FIFA+ available?

Initially, it is available in English, Spanish, French, German and Portuguese.

It will be available in Mandarin, Korean, Japanese, Italian, Arabic and Hindu in June 2022.

What have we said about FIFA+?

“FIFA+ represents the next step in our vision to make football truly global and inclusive, and it underpins FIFA’s core mission to expand and develop football globally,” said the FIFA President. FIFA, Gianni Infantino.

“This project represents a cultural shift in the way different types of football fans want to connect and explore the global game and has been a fundamental part of my Vision 2020-2023. It will accelerate the democratization of football and we are delighted to share it with the fans.