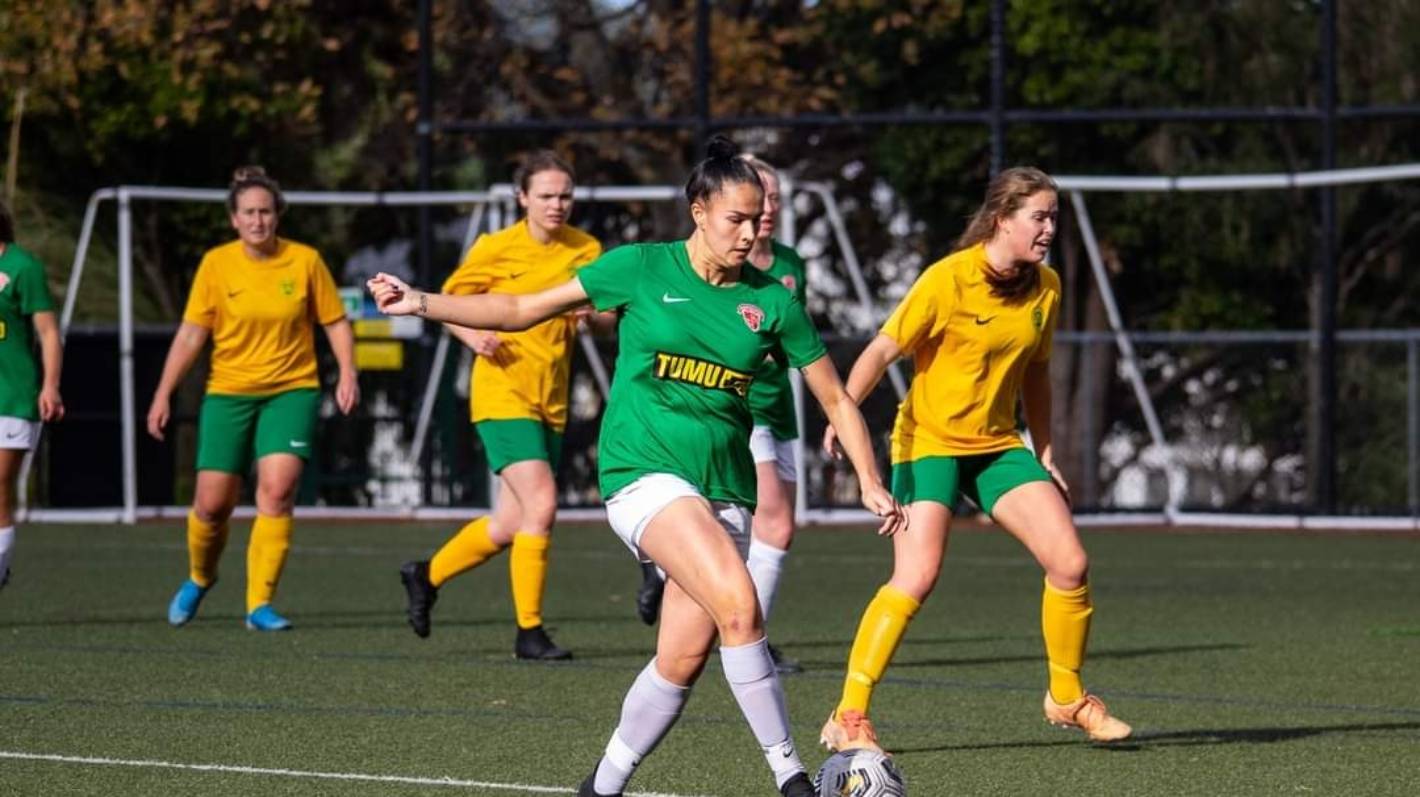 Torijan Lyne-Lewis’s main sporting goal is to play in a Women’s World Cup.

The 26-year-old Samoan football representative has been playing the sport in New Zealand for as long as she can remember. “I think it’s a dream that everyone has secretly inside of them, even if they don’t play sports,” says Lyne-Lewis.

But, there is an uphill battle when it comes to achieving the World Cup goals for some footballers and their countries.

The story is not on Lyne-Lewis’s side as Samoa never qualified for the flagship tournament. Indeed, apart from New Zealand, no other country in the Oceania region has succeeded in qualifying for the World Cup. (Technically Australia did, but they’re no longer under the Oceania Football Confederation banner – and that’s another story).

New Zealand automatically qualified for the 2023 FIFA World Cup as a co-host with Australia. And they just finished as the only Oceania Football Confederation (OFC) country in the Tokyo Olympics, losing all three games in the “Pool of Death” (along with Australia, the United States and Sweden). .

But with increased interest and investment on this side of the Pacific, football’s fortunes may soon change. And Lyne-Lewis may be able to achieve his long-term goal.

There are many initiatives and a lot of work to be done in the 11 countries of the region, but with a defined plan it seems more achievable.

The strategy focuses on five key areas, such as raising awareness of opportunities, removing barriers to participation and creating a culture where OFC leads by example in governance to improve gender equality.

Emma Evans, OFC’s women’s football manager, played a key role in setting up the strategy with the member associations, after work began a year ago.

“Each OFC staff member has also played a role in shaping this strategy and while I will lead the delivery and implementation, the strategy will be the responsibility of the entire organization to bring it to life. Said Evans, who also played coaching, football at an elite level.

Ambassadors have been appointed in each country.

Lyn-Lewis is the representative of Samoa and Teretia Teinaki, 19, is the Ambassador of the Cook Islands.

They have different experiences with football – and hope to use what they have learned to promote the sport and the benefits it provides.

Teinaki left the Cook Islands for New Zealand two years ago to study. She is completing a bachelor’s degree in sport and recreation with a double major in sport management and exercise science in sport.

After her studies, she would like to integrate a sports organization, ideally in football, and possibly evolve in a professional league. She would be the first female player from the Cook Islands, to her knowledge, to do so.

Teinaki was shocked to receive the role of ambassador. Mais is happy to promote women’s football in the Oceania region. “I think it’s a good strategy and it’s achievable if everyone works at it,” said Teinaki, who also plays for Manukau United in south Auckland.

Back in the Cook Islands, the sport is growing, says Teinaki. “I think there is a U16 women’s team coming up to tour New Zealand soon, so that’s good.”

She started playing football seven years ago as part of a school competition, then played for the Cook Islands football club and academy, before making her national team debut four years ago. .

Lyne-Lewis, meanwhile, is Samoan, Indonesian and lives in Palmerston North.

But she recently moved to clubs to play for Wairarapa United at Masterton. Even though that means extra travel time throughout the week for training sessions and games, the change was influenced by coach Paul Iffel.

“I basically wanted to play for him and recently found out that he was the new coach of the Samoa football team,” says Lyne-Lewis.

“So I’m in an incredible and unique situation where I can actually play locally and internationally for the same coach.”

Born and raised in New Zealand, Lyne-Lewis joined the Samoan team in early 2019 after attending a camp in Auckland. She agreed when her good friend and now teammate River Fuimaono suggested that she be tried.

“It was very cool. It was a bit of a surprise because I went to the test exploring an option, ”says Lyne-Lewis. From there, she was selected and traveled to the Pacific Games in Samoa.

In the long term, making a World Cup is the goal. But in the short term, it is important to have more training camps with the Samoan side.

“Also a few series or games together, so that we can get that competitiveness and build that team cohesion,” said Lyne-Lewis. “So when it comes to the Nations Cups, which are the World Cup qualifiers, we are ready for that.”

It was an important decision to play for Samoa, but she knew it would be a “real honor for my family”.

The Covid-19 unfortunately halted the team’s momentum. “We did really well at the Pacific Games, we actually finished second,” said Lyn-Lewis. “We narrowly missed out on winning this final so it would have been really great to keep that momentum going. “

Evans says women’s football in the Pacific has grown tremendously despite the challenges of Covid-19.

“This is an extremely exciting time for women’s football on this side of the world … I have no doubt that we will see an increase in the development, growth and sustainability of women’s football across Oceania.”

In some places, this is already the case. And Evans saw the changes.

There is now a full-time Women’s Football Development Officer in each member association, with some organizations employing more than one.

And community-based programs to get women involved, like the Heilala Manongi project in Tonga, a pilot mini-tournament, attended by up to 400 people on the first try, and the creation of women’s leagues in other smaller nations. .

“Having a key person to lead women’s football in each country has made a huge difference in the number of programs girls and women can participate in, both on and off the pitch and it will only help. continue to grow, ”Evans said.

“Working in the Pacific is working with people who are proud of their culture, their community, their people and of course football.

“This ensured a holistic approach to women’s football – it’s not just about increasing the development and sustainability of football or creating better performances on the world stage, but also using football as a tool for building stronger and more inclusive communities. “