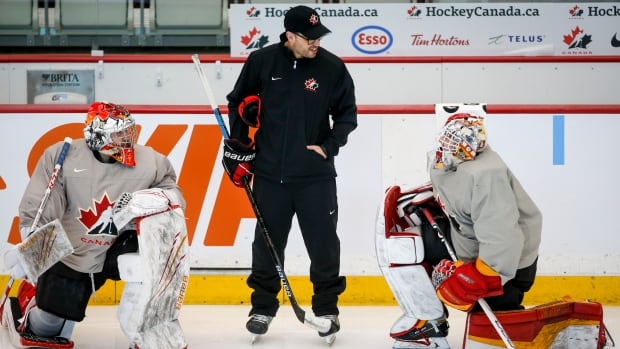 Alberta is imposing stricter COVID-19 restrictions, including a capacity limit for the world junior hockey tournament.

Premier Jason Kenney has said large venues that can accommodate over 1,000 people, including sports arenas, will be limited to half their capacity.

It will be forbidden to eat and drink seated in the rooms.

He says restaurants will be limited to 10 people per table.

The restrictions are due to go into effect Friday.

Canada is scheduled to open the world junior championship on Sunday against the Czechs at Rogers Place in Edmonton.

In a statement released Tuesday, Hockey Canada said it “fully supports the direction the Province of Alberta is taking, and we will continue to do our part to maintain the health and safety of all World Juniors and participants. the community in general â€.

He also mentioned that his event ticketing team is handling the change and will be in contact with ticket holders by the end of Thursday, but no information is otherwise available at this time.

How long can sports venues stay full? | The breakdown

The Quebec Major Junior Hockey League has suspended all activities until January 7.

The league says the break is necessary due to soaring rates of COVID-19 infection in eastern Canada.

Players will report to their clubs on January 3.

The QMJHL says it is working on updated protocols that will include preventative testing before players and staff arrive in the team environment.

In a press release released today, the QMJHL affirms that the safety of players and staff remains its top priority.

Postponed matches will be rescheduled at a later date.

The other two major junior leagues in the country, the Ontario and Western hockey leagues, are on the holiday break, with games in the WHL still scheduled to start on December 27 and in the OHL on December 28.

Scottie Barnes and Precious Achiuwa were added to NBA COVID-19 protocols by the Toronto Raptors on Tuesday, hours after teammates Fred VanVleet and Malachi Flynn were dismissed. There are now seven Raptors in league protocols.

Toronto is set to play in Chicago on Wednesday night after its game against Orlando on Monday in Toronto was postponed due to a COVID-19 outbreak on the Magic.

Olympic tennis champion Belinda Bencic tested positive for COVID-19 after her trip to Abu Dhabi and is showing “severe symptoms,” she said on Tuesday, a day after Rafa Nadal announced he also had tested positive.

Both players had traveled to Abu Dhabi to participate in the Mubadala Tennis World Championship exhibition event last week. Nadal also said he was having “unpleasant times” after testing positive upon his return to Spain.

â€œUnfortunately and even though I am fully vaccinated, I recently tested positive for COVID-19,â€ Bencic said on Twitter. “I am isolating myself now and taking all the precautions (measures) to get through this as best as possible because I am feeling quite severe symptoms (fever, body aches, chills).

“Although the timing is not ideal – as I was in the final stages of my preparations for the Australian Open swing – I will be heading to Australia as soon as I have been cleared and passed the period. isolation.”

Bencic lost to Tunisian Ons Jabeur, who replaced US Open champion Emma Raducanu after the latter tested positive for COVID-19 and withdrew from the event.

WATCH | Will NHL players go to the Olympics? :

Rob Pizzo addresses the giant elephant in the room: Whether or not the NHL / NHLH will end the Olympics. 5:34

Because the event was to be used as a last-ditch competition for long track speed skaters to be part of the Olympic team, the organization said it was working to adjust the selection criteria for the team for the Beijing Olympics in February.

The Washington Capitals’ game against the Philadelphia Flyers scheduled for Tuesday night has been postponed.

This is the 50th NHL game postponed this season for reasons related to the coronavirus. The league said COVID-19 issues with the Capitals resulted in the postponement.

That left the Tampa Bay Lightning against the Vegas Golden Knights as the only game left in the NHL this week. The league and the players’ association have agreed to start the annual vacation early and postpone games scheduled for Thursday.

Of the 50 games postponed, 45 have taken place in the past two weeks, with the delta and omicron variants spreading across North America. Over 15% of the league’s 700+ players are on antivirus protocol, a list that continues to grow.

Adam Silver “does not intend” to suspend NBA season

NBA Commissioner Adam Silver said on Tuesday there was “no plan” to suspend the season, even as the number of players entering league health and safety protocols linked to the coronavirus continues to increase.

Silver, in an interview with ESPN, said the league had considered several options but did not yet see a reason to stop the game. Until early evening Tuesday, at least 84 players from 20 teams – not counting some coaches and staff – were supposed to be in protocols, although those numbers tended to change almost hourly. The tally is largely based on what the teams disclosed in their most recent injury report.

â€œFrankly, we’re having a hard time figuring out what the logic would be behind a hiatus right now,â€ Silver said. “As we take a look at these cases that are literally tearing the country apart right now, putting the rest of the world aside, I think we end up where we kind of knew we were going to be in the last few months – et cetera. is that this virus will not be eradicated and that we will have to learn to live with it. This is what we are currently experiencing in the league. “

Silver’s remarks came the same day the league informed all 10 NBA teams with games scheduled for Christmas that shifting certain game times is a possibility for the scheduled five-game roster, though issues related to the viruses force changes in the composition and create holes in the national television grid.

They were among nine players, including two from the practice squad, who joined tight end Travis Kelce and kicker Harrison Butker on Kansas City’s growing roster.

Kansas City also has Charvarius Ward on the roster, which means two of their top three cornerbacks are in the league’s antivirus protocol, along with defensive tackle Chris Jones, linebacker Willie Gay Jr. and wide receiver Josh. Gordon.

On Monday, the first day of revised NFL protocols, 47 players were placed on the COVID-19 roster, the highest number in a single day since the start of the pandemic.

Another receptor from an AFC competitor tested positive on Tuesday when the Buffalo Bills placed broad Cole Beasley – the team’s most vocal vaccine critic – on the COVID-19 list. Unvaccinated players aren’t eligible to return for 10 days, so Beasley wouldn’t be available for Sunday’s game in New England with the AFC East top spot on the line.

Who owns a sport? The debate around Adventure Racing World Series intensifies