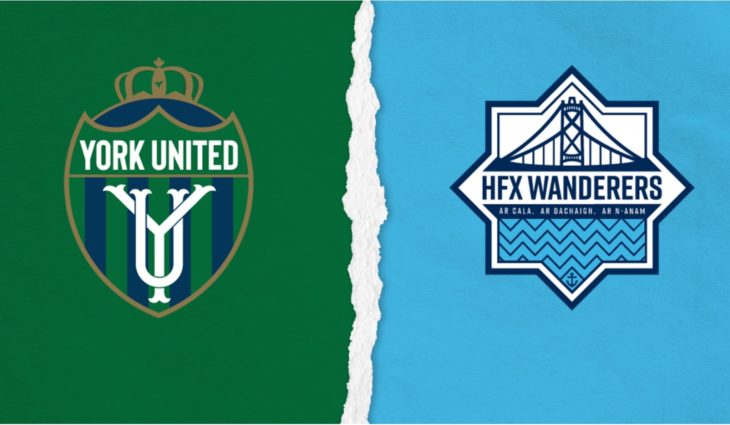 This weekend could very well be the end of the road for one of these two teams.

While mathematically it wouldn’t technically be a “must win” for Halifax or York United at York Lions Stadium on Friday, a loss could knock either team out of the playoffs. York and Halifax currently sit seven and eight points out of fourth and last playoff spots respectively, not to mention both teams’ negative goal difference.

If the Wanderers lose on Friday, they will be eliminated if Valor or Pacific win their games. A draw could also see them eliminated if Pacific and Valor win, or if either of those two teams wins and Cavalry gets a win or draw.

For York, meanwhile, a defeat could also see them knocked out of the competition if Pacific and Valor win their matches, or if one of those two teams wins and Cavalry wins or draws in the Al Classico.

“It will be a tough game, they are doing very well and have two clean sheets in a row. They are on the right track.

With their backs against the wall, however, both teams have shown a good fight lately to keep their playoff hopes alive. York, in particular, have been the hottest team in the league, winning five of their last seven games.

“It will be a tough game, they are doing very well and have two clean sheets in a row,” said York United head coach Martin Nash. “They’re on a roll, but so are we, so both groups probably come into this game feeling confident. This is one of those games you want to play for. One that means something, so the guys are going to be in and it should be a good game.

Here’s a look at their current status and remaining schedule. It doesn’t get any easier for the Nine Stripes after that, as they face three back-to-back playoff prospects: Forge FC, Valor and Atlético Ottawa with the final two weeks of the season ahead.

Halifax has also looked much improved lately, with back-to-back clean sheets and a 1-0 win over playoff prospect Valor last weekend. But this improvement has so far only been really evident at home. They haven’t won an away game since June 25.

Much like York, they have a very tough race to end the season. They have Atlético Ottawa and Pacific at home, where they haven’t lost in four games, before ending the season at Tim Hortons Field against Forge.

Despite being the two worst performing teams in the league, York has been anything but staring in recent weeks. A number of key additions, including Mo Babouli, have sparked an offense that has scored three or more goals in five of its last seven games, dating back to a 4-2 win over the Wanderers in Halifax on August 1.

The series between the two has been incredibly close over the years, with seven of the 14 all-time meetings ending in a draw. Halifax is four wins to York’s three and has won two of three games between the two teams in 2022, including a 1-0 victory on the opening day of the season on April 7 at York Lions Stadium.

Due to a suspension, York top scorer Osaze De Rosario will miss the game. However, Nash said if not, everyone is at least on the verge of returning, so he should have a full squad for this game.

“They’re actually playing differently than they’ve been lately, so we have to be prepared for two different eventualities if they play in a back five or play in a back four. But I think for us, we’re really going to approach the game like we’ve been doing lately and go into teams, try to attack and we’ve been successful that way. — York United head coach Martin Nash

A table tennis giant in the making?